The Dark Side of Antler Worship

It happens every fall, as soon as deer season opens: my e-mail gets clogged up with photos of huge bucks.... 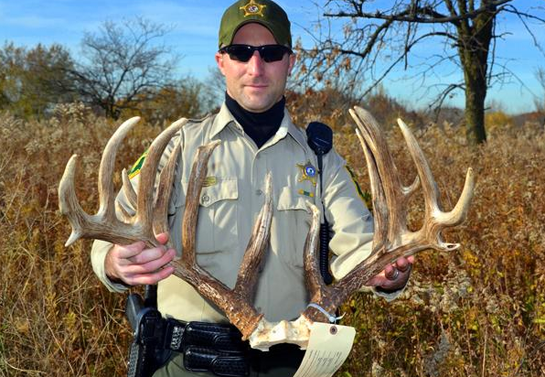 It happens every fall, as soon as deer season opens: my e-mail gets clogged up with photos of huge bucks. They are accompanied by subject headlines like “Potential Iowa State Record Buck” or “Kentucky Kid Takes Monster Buck.”

I forward the photo on to friends and family and think nothing more until they show up again under a subject line of a totally different nature. “Poachers Arrested in Big Buck Sting” or “New State Record Poached.” The bucks are the same but the happy hunter has been replaced by a law enforcement officer holding the rack/evidence.

One such incident was reported recently on this very website. Outdoor Life reported on a record buck taken in Indiana that is alleged to have been poached by a wannabe TV hero. To make matters worse, the animal in question somehow made its way onto a hunting TV show last summer. The same week Field & Stream reported on another “record gone wrong” charge, this time in Illinois. The details of the story are still vague but it involves trespassing, falsifying information, illegal possession etc. Three guys with multiple counts each, and one who is allegedly associated with the hunting industry.

Rack Crazy
My first reaction was … here we go again, this is what we get with when all you see on hunting TV is some celebrity gushing over the book animal he just shot on camera. I’ve seen this movie before and the ending stinks. I brooded a little more and decided I may as well blame the Internet, too since these big buck photos are all over it and heck, there are all those magazine covers as well (big buck photos all but guarantee newsstand sales increases). Times sure have changed. Back when I was a boy…

Then it hit me, when I was a boy we hung any deer we shot on the front porch for everyone to see. My dad would drive me through all the hunting neighborhoods (most) looking for bucks on display. We knew where the “real hunters” lived and knew that by the end of the first week there would be a good buck hanging. We knew which bars ran big buck contests and kept track of what was hanging. That was more than 50 years ago and I guess at age 10 or so I became an antler stalker just like every other kid from a hunting family.

A History of Antler Worship
Antler worship is nothing new. It’s part of the deer hunting culture. It is part of our hunting heritage. Early man drew antlers on cave walls to tell his story and there is ample evidence that antlers have been used in native people’s spiritual ceremonies for thousands of years. We adorn our walls with antlers, decorate our barns and use them to hold light bulbs, wool coats and old guns. We’ve been taking pictures of them since the camera was invented.

Back in the day, the conversation was mostly about points, but in today most of the antler conversation centers around inches or score (Boone & Crockett, Pope & Young, maybe SCI) and of course record book ranking. It is also about spread, and beam length, and bases (circumference) and stickers and drop tines and a dozen other descriptors antler freaks have come up with to describe their favorite fetish. Indeed, an entire lexicon has developed around antlers. The language may have changed some, but the attraction has not.

Antlers make us think and do strange things. We take too much time off of work, we buy too many guns, we live from deer season to deer season, and we spend too much time sitting in a treestand. We look at photos of antlers and even dream about them. We pass up small bucks and come home empty handed. Show me a hunter who shoots the 6-point that’s feeding next to a 10-point and I will show you a damn poor shot. By and large it seems to me that our collective fascination with antlers is pretty widely held and all-in-all a pretty harmless affliction.

A Poacher Problem Not an Antler Problem
So what about the alleged poachers? Did their attraction to antlers lead to their moral demise or did their moral demise lead them to commit crimes in pursuit of big antlers? In other words do we blame hunting TV, the Internet and magazine covers for the actions of the accused or do we assign blame where it belongs–to the alleged poachers who broke the law.

The answer should be clear. To lay blame on hunting TV, the Internet, or magazine covers would be to set up a straw man and be grossly unfair to every hunter who has ever admired a set of antlers and dared to dream of getting his hands around a set of “horns” like that.

Hunters may worship antlers, but we obey the law. Poachers on the other hand break the law, soil our sport, embarrass themselves and ruin the reputation of their associates in the field. They lack character and the moral code to play the game as prescribed. They dishonor the animals they hunt and the essence of hunting in general.

To blame antlers would be to let them off easy. It would give them something in common with us all. If guilty, they have nothing in common with those of us who honor antlers and honor the hunt by playing by the rules. They are not of us but against us, and as such should be treated accordingly.