The state of Oklahoma has without question, been consistently producing some top-heavy bucks. In fact, we’ve already covered numerous jaw-dropping... 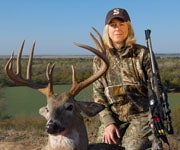 The state of Oklahoma has without question, been consistently producing some top-heavy bucks. In fact, we’ve already covered numerous jaw-dropping bruisers on the BBZ that have been tagged inside the borders of this often overlooked, but red-hot hunting destination. My good friend and fellow outdoor writer, Mike Lambeth, recently visited Sayre, Oklahoma with his wife Donna for a muzzle-loading hunt near the North Fork of the Red River. During this trip, Donna was able to set her crosshairs on a Sooner State giant that would make any hunter’s heart rate kick into maximum overdrive.

This happily married couple has enjoyed spending time together in the outdoors chasing fired-up longbeards and thick-racked bucks over the past several years. As you can imagine, the pair could hardly wait to hit the woods together during the final weekend of their home state’s nine-day muzzle-loading season. Upon arriving Friday afternoon Oct. 28, the Lambeth’s quietly entered a strategically placed ground-blind that overlooked a lush green food-plot along the edge of the river. The entire area was covered with fresh sign and the husband-and-wife hunting team was extremely excited about the evening’s possibilities.

Deer began to slowly filter into the green field within a few short minutes and Donna spotted a decent buck directly behind the blind. She immediately grabbed her binoculars and started glassing while carefully judging the deer’s rack. At that very moment, Mike told her to quickly turn around and get ready because a monster buck had just stepped out of the thicket. It only took one glimpse at the deer’s wide-rack and tall-tines to see that this whitetail was definitely a shooter.

As a caring husband, Mike calmly coached his wife on what to do and helped her prepare for the moment of truth. He ranged the buck at 167 yards, which is a pretty demanding shot for a smoke-pole! Without hesitation, Donna cradled the barrel of her TC muzzle-loader into the open split of the tripod and took a steady aim. When she gently squeezed the trigger, a puffy white cloud of smoke filled the blind and temporarily blurred their vision. The air cleared just enough to allow the pair to faintly see the heavy-racked buck crashing to the ground. Donna’s Oklahoma bruiser had a 21 ½ inch inside spread, 12 massive points and scored an impressive 164 6/8.

Way to go, girl! On a side note: Donna, you probably need give Mike a big hug and kiss because not too many husbands would give their wife the first shot at a buck of that caliber! Hopefully, you’ll be with Mike on his next hunt and he’ll be able to drop the hammer on another wall-hanger. Congratulations to both of you and good luck with the rest of your season!