Is The Rut Over? Hell No!

My hunting neighbor Louie stopped by this weekend to check in. I see him every year about now because he... 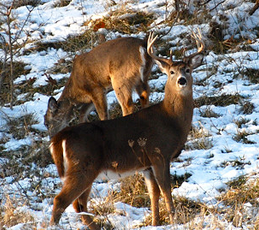 My hunting neighbor Louie stopped by this weekend to check in. I see him every year about now because he takes his vacation to bowhunt the rut.

After the usual “Whad ya see” and “Whad ya get,” he went on to ask if the rut is over.

I almost fell off my chair. “Rut over! For God’s sake Louie it just started!”

“Well I’ve been out all week and I haven’t seen much activity in the last few days” he whimpered. A couple of weeks, ago I was seeing some pretty good chasing by young bucks – nothing big but at least I was seeing some action. My buddy texted me this morning that the Outdoors column of his newspaper claimed that the rut was over. “Get back in your stand Louie, either your buddy is playing a bad joke on you or the guy writing it should be trolling for lakers,” I told him.

The door slammed behind him, and he was last seen headed west on his 4×4.

What we have here is a failure to communicate. Hunters have picked up the notion (probably through the popular press) into thinking that “the rut” is a lock step, uniform set of deer behaviors which culminate with a few days of breeding and everything goes back to normal. Not so. Rut behavior is neither uniform nor occurs in a lock-step manner and breeding lasts a whole lot longer than most people believe.

Yes, the deer are currently breeding in the north and yes rut behavior has been in evidence for some weeks now but no, the rut is definitely not, I repeat not over. Study after study has documented that the majority of whitetail breeding in a given location occurs over at least a 3-week period. So get out there and hunt, the best is yet to come!