Monday, November 28th was opening day of shotgun season in Ohio and Kyle Danflous and his son Devin were hunting... 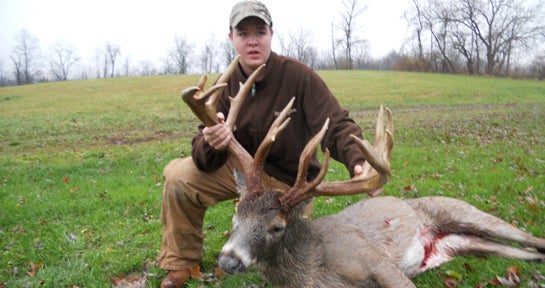 Monday, November 28th was opening day of shotgun season in Ohio and Kyle Danflous and his son Devin were hunting together in Licking County on the edge of a draw that led up to a wooded hillside where the two hunters had often spotted deer bedding.

At about 8:00 a.m. a big buck came off the hill with three does behind him. The deer all came within 18 yards of Kyle and Devin before they saw the two hunters and stopped in their tracks. It was too late for the big buck though as Devin already had his Winchester 1200 20-gauge pump leveled and was squeezing the trigger.

The massive buck dropped in its tracks, but Kyle and Devin stayed on stand for the next 15 minutes to make sure he didn’t get up. Even though they were less than 20 yards from the giant buck they couldn’t tell if it was a big 12 or 14 pointer from the way it way lying on the ground.

As Devin cautiously approached the buck he began to realize just how big of a deer this was. With his hands on the massive rack, Devin counted 21 points.

Devin’s buck has a 21 ½ inch inside spread, 27-inch main beams and six-inch mass measurements throughout the rack. Kyle rough scored the deer just under the 200-inch mark – quite an impressive whitetail.