Five years and three encounters ago was the beginning of Keith Hunter’s quest to kill the elusive whitetail. It was... 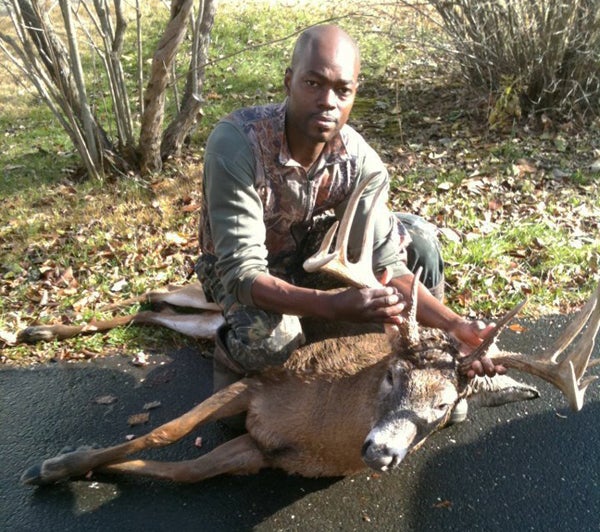 Five years and three encounters ago was the beginning of Keith Hunter’s quest to kill the elusive whitetail.

It was during the 2007 archery season in Connecticut when Keith first saw the buck. At that time the deer carried eight heavy points on his rack. As luck would have it, Keith couldn’t unhook his bow from the pull-up rope in time to get a shot. The buck disappeared as quickly as it came and it would be the last time the buck was seen that year.

Memories of the buck were fading until Keith heard the snap of a stick on November 13, 2010. Slowly turning to see what made the noise, Keith saw the buck just 50 yards away. It appeared like a ghost and had come to check a nearby scrape. Luck continued for the buck and Keith had no shot opportunity. He watched the buck, now a 10 pointer, as he pawed at the fresh earth below and worked the scrape.

Another year would pass before Keith would encounter the buck again. On November 26, 2011 Keith checked the time on his GPS which happened to tell him that 6:35 a.m. was a good time for hunting. By 5:41 am Keith was in his stand and ready for the morning hunt, hoping at the very least he would see deer on this day.

At precisely 6:30 a.m. a twig snapped from the southwest and Keith slowly turned to look over his right shoulder. It was a shooter buck! Keith had no idea how big the deer was or how many points it had, all he knew was that the buck had long, sweeping main beams and it was without a doubt a shooter.

Keith’s heart started racing as the buck entered the shooting lane he had cleared that summer. The buck just stood there taking in the air as Keith watched and thought to himself, “Go ahead and bust me.”

The buck was in the very same entry point that Keith had been in earlier and much to Keith’s surprise it didn’t pick up his scent. The giant whitetail walked right under Keith’s stand and proceeded to walk away from Keith. Without a clear shot of the buck’s vitals, Keith anxiously waited for the buck to turn.

As Keith came to full draw, time stood still. Keith tracked the buck with his pin and as the deer stepped to his left at 26 yards, he let his arrow fly. The buck bolted and then piled up in the middle of a creek.

It wasn’t until the Keith and his buddies pulled the buck out of the water that they realized this was the same buck he had seen during the 2007 and 2010 seasons.

Whitetails are known to be tough, but this old buck was as tough as they come. While processing the deer, Keith pulled not one, but two broadheads out of the deer with parts of the arrow shaft on them.

“I saw him last year and wondered why he walked so stiff legged. Well after finding two other broadheads in him I know why,” said Keith.

It was a long journey for Keith, but after five years he had finally caught up with his elusive buck.