Watching your child’s excited reaction after taking his or her first whitetail undoubtedly ranks at the very top of the... 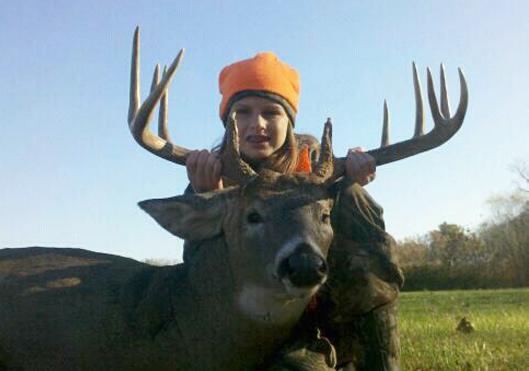 Watching your child’s excited reaction after taking his or her first whitetail undoubtedly ranks at the very top of the list for outdoor experiences. Just ask lifelong hunter LJ Planer how he felt when his little girl knocked down her first deer.

His daughter Rileigh didn’t begin her deer hunting career with a slick-headed doe or small basket-racked buck. This 10-year old hunter was patient and held out for something a tad bigger. After waiting four seasons, daddy’s little girl stepped to the plate, took a steady aim and dropped the hammer on an 11-point giant that scored over 150. Here’s the story of how this remarkable hunt unfolded.

A few weeks ago, Planner and his daughter hit the woods wide open during the Tennessee Juvenile gun season. They were setup in a ground blind that overlooked a fresh-cut corn field. After sitting and waiting, a long-tined spike finally showed up to check out the father and daughter’s rattling and grunting sequences.

Once again, Rileigh elected to let the smaller buck walk, which was definitely the right decision. Within minutes, a much larger 150-class brawler showed up and chased the spike out of the field.

Without hesitation, the young hunter rested her crosshairs on the buck and squeezed the trigger. A solid hit sent the wide-racked buck on a death run that ended about 60 yards from their setup. Needless to say, there was a lot of hugging, smiling, and high-fiving after the shot.

With his daughter’s first buck on the ground, Planner realized that none of his previous hunting memories or personal experiences in the field compared to the special moment he had just shared with his little girl. Trips like these truly symbolize what hunting is all about. Spending time in the outdoors with your family and making memories that will last a lifetime still are still the cornerstones of hunting tradition.
Congratulations Rileigh on one heck of a first deer!