Sometimes in life we don’t always get our first choice, but that’s not always a bad thing. For example, recently... 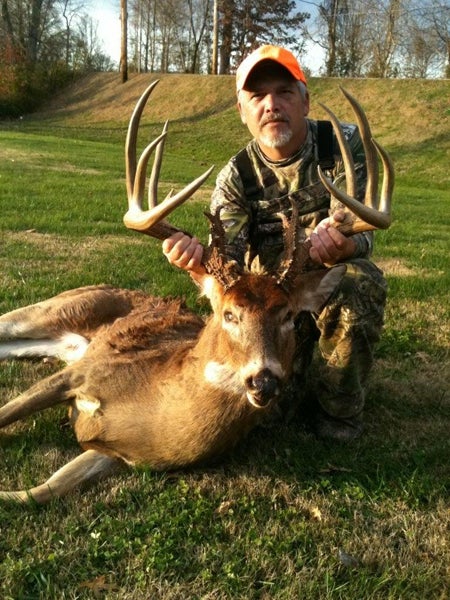 Sometimes in life we don’t always get our first choice, but that’s not always a bad thing. For example, recently a hunter named Greg Allen decided to go ahead and cash in his one Kentucky buck tag on a deer that was actually not his first choice. However, it would be pretty difficult for any serious whitetail hunter to let a giant 18-point buck walk in order to hold out for something bigger. Here is an inside look at how this amazing hunt unfolded in Washington County, Kentucky just a few weeks ago.

For the past few months, Allen and his family had been collecting trail camera photos of an absolute monster buck. Needless to say, Allen along with his son and daughter were all hoping to connect with the giant whitetail before the Bluegrass State’s season ended. As luck would have it, Allen’s 12-year old daughter would be the first to have an encounter with the buck that was at the top of the hunting family’s most wanted list. Unfortunately, she was unable to close the deal during the early two-day youth season.

When the state’s November modern firearm season opened, the entire family felt good about their chances of tagging the heavy-racked whitetail. During the first morning, Allen and his daughter were hunting together and they were startled by an echoing rifle shot around 9:30 a.m. It was Allen’s son, who had taken a great 9-pointer over on the next ridge. The deer were on the move.

After helping his son field-dress the buck, the proud father decided to sneak back to the truck to get everyone a cold water to drink. Just before reaching his vehicle, he spotted a slick-headed doe below the hill and she was looking over her shoulder. Allen quickly realized that the doe was looking at a giant buck. He ranged the large-bodied deer at 211 yards, before placing the crosshairs on its massive shoulder and squeezing the trigger.

The buck instantly hit the ground, but tried to get back up. Without hesitation, Allen hit the bruiser with a second fatal shot. All of a sudden, he spotted another doe and the monster from his trail-cam pictures. He had just taken his personal best buck (rough green score of 173), which had super-thick mass and extra-long tines. Ironically, the giant that was his first choice was even bigger than the heavy-racked 18-pointer he had just tagged. Maybe his daughter will be able to knock that one down before the final buzzer rings! Congratulations Greg on a phenomenal whitetail. An 18-pointer is not too bad for a second choice!