Chris Alberini was excited for the upcoming hunting season in Massachusetts. “I had a ton of good bucks on my... 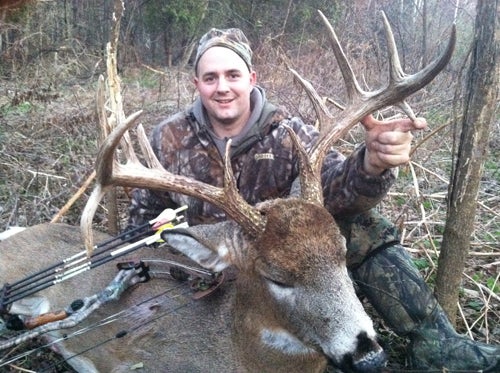 Chris Alberini was excited for the upcoming hunting season in Massachusetts. “I had a ton of good bucks on my trail cameras and it looked like I would have a couple “slam dunks” on some good bucks,” he said.

As the season got underway, Chris had plenty of does and small bucks walk by his stand, but the big ones that he had captured on trail camera were nowhere to be found. Frustration was beginning to set it, but Chris stuck it out and continued to spend as much time in the tree as he could.

With the bucks not moving during shooting hours, Chris changed his focus to the does and decided to take a few off the property to put some meat in the freezer.

By the second week of November things started to change and the bucks were becoming more active. Chris’ trail cameras captured several bucks as they cruised through the area in search of hot does.

While on the stand one evening, Chris heard a commotion coming from the swamp to his right and watched as a doe busted out of the thick cover. Trailing right behind her was the big nine pointer that Chris had been after. Light was fading and it was now or never for Chris. With the buck at a mere fifteen yards, Chris let his arrow fly and watched in horror as the arrow sailed over the buck’s back and buried into the mud. He was crushed.

The next week was slow, but on the 24th one of Chris’ friends told him how several hunters on a nearby property had been seeing a 13 thirteen pointer with double drop tines. Chris’ friend said the buck was one hot doe away from being on the property Chris was hunting.

“I didn’t even think twice about it because I was still fixated on the nine point that got away,” said Chris.

That week Chris moved the stand 500 yards from where he had missed the nine pointer and patiently waited for the right wind to hunt the stand. On November 26th the wind was right and Chris settled in the pine tree stand overlooking a small clearing.

It was obvious from all the rubs in the area that the bucks were moving through the pines–hopes were high. As primetime approached, Chris heard the unmistakable sound of deer walking. Three does meandered through the pines following a trail that would lead them to a shooting lane eighteen yards away from his stand.

Chris was beginning to wonder if the nine was gone and contemplated filling another doe tag when he saw a big-bodied buck following the three does. With only a glimpse of antlers through the pines, Chris knew it had to be the big nine. Chris came to full draw as the buck passed the last pine and concentrated on a tuft of hair just behind the bucks shoulder. Before the buck had a chance to take it’s next step the arrow was on its way, and Chris heard the thump of a solid hit.

Chris climbed down and found his arrow covered in blood. Even though he had a good blood trail, Chris decided to back out until the next morning.

That next day Chris returned with his father to go look for the deer. Within eighty yards of the first sign of blood Chris could see the white belly of his buck! As he approached the deer Chris began to realize this wasn’t the nine pointer he though it was. It was a wide, main frame ten pointer with a drop tine! Chris tried to pick up the deer’s head, but couldn’t, it was stuck on something. As he pulled harder the rack came free of the soft ground and Chris saw a second drop tine, double the size of the first one!

Right then and there Chris realized this was the buck he had heard about. The big buck was a mainframe ten pointer with double drop tines and a kicker point coming off its right, main beam giving the buck thirteen scorable points. Turns out the buck really was just one hot doe away.