In case you haven’t seen him yet, here he is, the so-called million-dollar deer. Images of this buck started circulating... 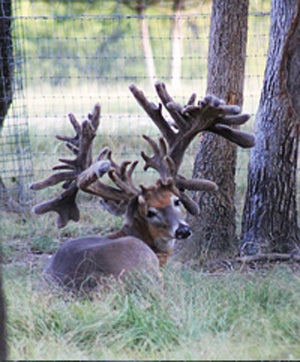 In case you haven’t seen him yet, here he is, the so-called million-dollar deer. Images of this buck started circulating the Internet last month with claims that the deer was worth $1 million.

The mutant-like whitetail is clearly a pen-raised breeder buck and he recently popped up on Trophy Watch, the Boone and Crockett Club’s website.

What was the B&C’s take? Here’s what they wrote …

_”It begs the questions such as: what came first, megatron, super-deer or folks who would pay to shoot them; scientifically we have the know how, but why should we; is this buck domestic livestock, and if so is killing him still considered hunting; what does the 73 percent of those non-hunters who still support hunting think; and has the idea of trophy for some surpassed the satisfaction of the chase?

Whatever your answers are to these questions, or your feelings toward this growing trend of trophy at any cost, you will never see such animals listed in Boone and Crockett records._”

For an in-depth look at this sort of deer breeding and farming, check out BBZ Blogger Craig Dougherty’s piece: Freak Show Bucks: A Hard Look at Breeding For Antlers