Patience Pays Off For Kentucky Hunter Who Took 180-Inch Buck

When you’re a father and hardcore deer hunter, it can be extremely difficult to juggle a demanding work schedule and... 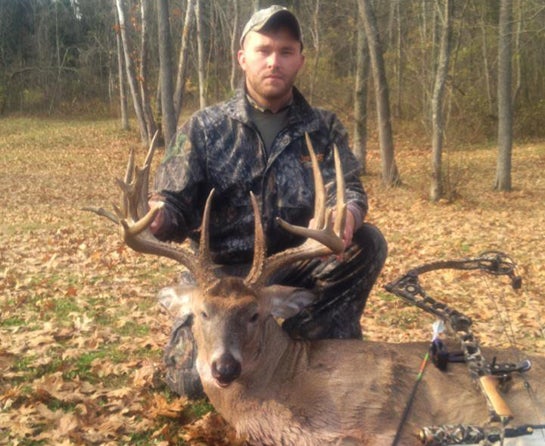 When you’re a father and hardcore deer hunter, it can be extremely difficult to juggle a demanding work schedule and family commitments with fall hunting. This is exactly the dilemma that Josh Hunt found himself facing during the magical month of November. In addition, Hunt had promised his 7-year-old son that he would get the first shot during Kentucky’s annual modern rifle season.

Needless to say, this guy was really feeling the pressure to tag-out with his bow. As a result, he decided to take the second week of November off from work and hunt from daylight until dark. Hunt’s perseverance and dedication was finally rewarded during the last day of his vacation. Here is how his amazing hunt unfolded.

During the first part of Hunt’s vacation, he was seeing a lot of deer activity near his treestand. He was setup directly between two bedding areas with thick cover, which allowed him to catch bucks cruising back and forth for receptive does. In fact, Hunt almost shot a 150-class bruiser the weekend before his vacation started, but the buck busted him when he was drawing his bow. At the time, Hunt felt like he had been gut-punched and that another opportunity would probably not present itself before the opening of gun season.

Consequently, this missed opportunity was actually a blessing in disguise, but it would take a long and difficult week in the woods before the hunter would realize it. Just before time was about to run out, the deer movement near his stand dropped off, which made him think about switching locations. However, his gut told him to give the hunting spot at least one more try. After a couple hours in the stand, Hunt picked-up a large set of antlers to his left. Unfortunately, the massive-racked buck was cruising for does and headed directly away from him.

In a desperate attempt, Hunt hit the lovesick giant with an echoing grunt, but the deer just kept going with its nose to the ground. It took a second and third grunt coupled with an estrous doe bleat to turn the buck around. This deadly combination of calling brought the rut-crazed deer in on a dead run. Hunt quickly came to full-draw and sent an arrow screaming toward the buck’s vitals. Upon impact, the large-bodied brawler frantically busted through the brush before finally crashing about 80 yards from his stand. When Hunt walked up to the monster, he was completely blown away by the size and mass of the buck’s rack.

Without question, staying in the stand from daylight until dark and refusing to throw in the towel is often what it takes to connect with a wall-hanger. Hunt’s dedication and perseverance enabled him to close the deal with a buck of a lifetime. This amazing whitetail carried 18 unbelievable points and will probably score somewhere in the neighborhood of the upper 180’s, which is not too shabby. Way to hang in their Josh and congratulations on a phenomenal whitetail!