It’s the nontypical trophy that gets a deer hunter’s heart pounding. Nontypical bucks don’t follow the rules when it comes... 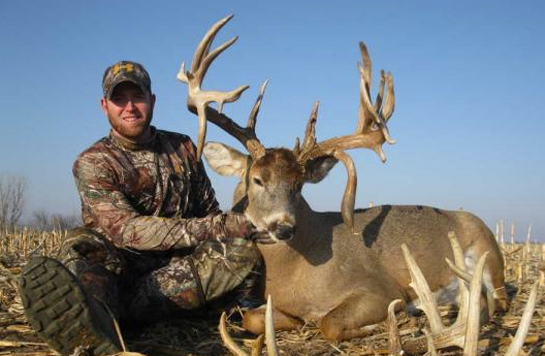 It’s the nontypical trophy that gets a deer hunter’s heart pounding. Nontypical bucks don’t follow the rules when it comes to growing points and you’ll find them in all shapes in sized growing in just about any direction imaginable. These truly are some of the most unique bucks in the woods.

Lucas Cochren had been chasing the big Kansas non-typical for three years.

Lucas and a group of hunting buddies have been managing over 1,000 acres in recent years and the group plants 10-12 acres of food plots to monitor the herd and keep track of the older class bucks. Lucas and his friends try not to shoot anything unless it’s at least 5 1/2 years old.

Hunting in Kansas allows Lucas to take one buck with his weapon of choice. Although he prefers to hunt with archery tackle, he’s had more luck with the rifle over the last few years putting down a 170-inch buck last year and a monster 198-inch buck in 2009.

The nontypical showed up for the first time on trail camera as a 3 ½-year-old with 150 inches of antler on his head. The next year the buck had put on an additional 30 inches but had broke some tines off while in velvet and the group of hunters agreed to pass on him again.

During the 2011 season Lucas and his buddies played cat and mouse with buck, but were never able to cross paths with the giant nontypical. Lucas even had trail camera pictures of the buck just eight yards in front of a stand during archery season with plenty of shooting light left, but no one was in the stand that day.

On opening day of rifle season Lucas finally caught up with the big buck. Just after the first few minutes of legal shooti ng light Lucas spotted him 320 yards away. He took aim and shot, but he missed low and the buck vanished. The buck disappeared for the remainder of the week.

The following Friday Lucas got out of work late and didn’t arrive at the woods until 5 o’clock. Lucas headed to a small, protected spot that he could easily get to. It was a place he had watched the monster nontypical all summer long the previous year. As he peered into the field, Lucas spotted the buck with a few does. This time Lucas made the shot count and dropped the buck in its tracks.

The giant nontypical was even bigger than Lucas had thought. With 25 scorable points the buck rough scored a whopping 239 inches. Drop tines and stickers give him unique character and the 3-year journey is one Lucas will never forget.

See more on this story at CJ Online.