Joe Fischer woke up late on the morning of November 5th. Instead of heading down south to the property he... 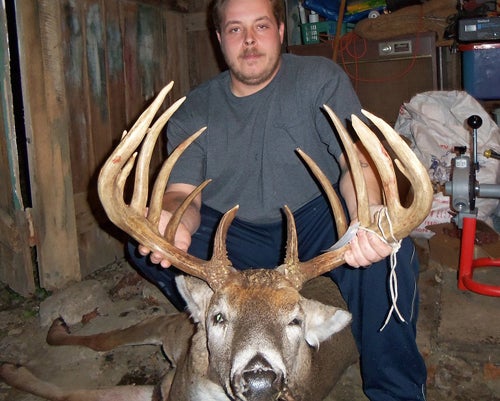 Joe Fischer woke up late on the morning of November 5th. Instead of heading down south to the property he wanted to hunt, he decided to hunt a small 8 ½-acre patch of woods behind his house in Ohio.

“I really haven’t had any pictures of really nice bucks at either place so I was already kind of disappointed,” said Joe.

The morning was calm and cool, but not too cold. Joe described it as “one of those mornings that you know you’re gonna see something.”

It was around 8:00 am when Joe decided to pick up the rattling antlers and hit them together. To add to the ‘fight’ that was going on, Joe followed his rattling sequence with a few short grunts.

“The rut was definitely on, well, at least everybody else said it was. I myself haven’t seen much,” said Joe. That was about to change for Joe. In the next fifteen minutes a shooter buck would appear and slowly make his way towards Joe’s stand changing the outcome of his entire season.

Cautiously, the buck approached Joe’s stand searching for a rival to challenge. Joe instantly knew this buck was a shooter and focused on picking a spot.

Pacing back and forth, the buck looked like it was getting ready to head back the way he came. Joe steadied his Horton crossbow and fired a crossbow bolt at the buck. As the shot went off, the buck was mid stride and the shot looked high and far back. The buck turned and ran, heading toward a tiny strip of woods behind that led to a cornfield.

Joe reached for his cell phone and woke up his wife to ask if she could see the buck out of their kitchen window. Joe’s wife was able to spot the deer and watched as he crossed into the cornfield and disappeared by a small tree.

After regrouping at the house for about an hour, Joe headed toward the cornfield to pick up the blood trail. Tiny drops of blood were scattered here and there, but the trail went cold and Joe had nothing more to follow. For the next three hours, Joe searched between row upon row of corn, looking for the proverbial needle in a haystack.

Running out of options, he headed to a neighbor’s house to ask permission to continue his search in a small three-acre strip of woods on the opposite side of the cornfield.

Joe, with the help of his wife and his four-year-old son, continued the search in the small patch of woods. Joe’s wife and son headed down an ATV path, while Joe searched a thicket on the other side of a small stream. After six hours of searching, Joe spotted the buck with his rack laying up against a small sapling.

As Joe approached the buck, he was marveled by it’s massive rack and how it just kept getting bigger and bigger. Joe gripped the buck’s antlers and looked over his shoulder towards his wife and son to let them know he found the buck. While yelling out to his wife something just didn’t feel right.

“I felt my hand start moving, looked down and the old boy was staring at me. I let go of his rack and stepped back about ten feet. Words can’t describe what I felt at that moment,” said Joe.

Joe asked his wife to hurry back to the house to get his crossbow. As he stood there watching the fallen buck, he began to wonder, “What am I going to do if he gets up? No bow, no knife, no nothing.”

After a very long fifteen minutes, Joe’s wife returned with the crossbow and Joe finished off the deer. It was an epic end to an incredible hunt.

Two lessons can be learned from Joe’s hunt. First, no matter how excited you are about your buck, remember to cautiously approach the deer and touch it with a stick or something to distance you from the animal to ensure it’s dead before you put your hands on the animal. If this buck had more strength in it, Joe could have been in serious trouble. Second, although not all landowners will allow you to pursue a wounded animal with a weapon on their property, you should always ask, and at the very least, carry a knife for those just-in-case scenarios.

Joe rough scored the heavy antlered 14 pointer at 195″ gross and estimates the buck would net in the low 180s.