Stealth Cam and Jim Shockey teamed up to develop the new Shadow trail camera. The Shadow is a compact camera... 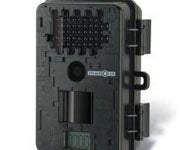 Stealth Cam and Jim Shockey teamed up to develop the new Shadow trail camera. The Shadow is a compact camera that incorporates video, still imagery and time lapse, and features TRIAD technology.

The video setting is capable of recording 5 – 240 second video clips with audio. There are three photo resolution settings: 8MP, 3MP or 1.3MP. To top it off, the camera features Time Lapse, which allows hunters to take pictures at regular intervals to monitor open fields and food plots. The 54 black infrared emitters give this camera a 50-foot range, and make the Shadow a camera that won’t spook game or let other hunters know you’re scouting the area.

One of this camera’s most unique features is its ability to switch between 50 and 36 emitters to adjust the light output for specific scouting scenarios. This is extremely helpful for getting clear nighttime pictures and avoiding washed out images.

An external LCD status display lets the user quickly identify and select the modes of operation. The time/date/moon phase and temperature stamp helps identify the exact wildlife habits for the hunter. The Shadow has a 2x or 4x digital zoom setting and incorporates an SD card slot that accepts up to a 16GB memory card.

To aid in the setup of the camera, there’s a test mode to let you know if the camera will pick up game at the intended crossing point. The camera runs on eight AA batteries, or you can use an external 12V battery box. It has a low battery indicator light to let you know when it’s time to replace the batteries.

With an MSRP of $199.99, Stealth Cam packed a lot of features into the Shadow.