Don’t sleep on Hawaii as a hunting destination. These days the beauty of the island and its natural resources are... 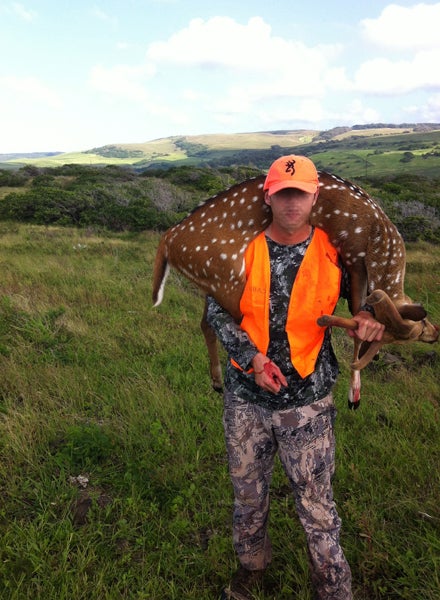 Don’t sleep on Hawaii as a hunting destination. These days the beauty of the island and its natural resources are at risk as a result of a seemingly harmless act. Axis deer were illegally introduced to the island and like most deer have had no trouble adapting to the landscape and climate of Hawaii.

The Hawaii Department of Land and Natural Resources is now trying to protect the The Big Island from the impacts of the axis deer (these deer have been living on Maui for decades). The deer have become known pests within the agricultural community and are threatening native and culturally significant plants on The Big Island, many of which are endangered to begin with.

Last year a partnership was formed between conservation groups and agricultural groups to address the threat of the axis deer on the Island. On April 11, 2012 as part of an official program to eradicate the invasive axis deer, the first axis deer was taken during a hunt on the Big Island, according to Big Island News.

The DLNR provided proof of the kill in a photo showing the hunter with the axis deer on his back. To protect the hunter’s privacy they blurred out is face (seems a little excessive if you ask me).

It was only after a year of extensive field surveys, training and coordination with land owners and managers that hunting was decided upon as the most effective way to manage the axis deer population. The goal of the program is to eliminate the non-native axis deer population before Hawaii’s ranchers and farmers face the same problems now occurring on Maui and other places where deer populations are rapidly rising out of control.

The first attempt to bring axis deer to the Big Island for game hunting began in the 1950’s and 1960’s – a process which was halted by protests from the farming and ranching community who were already aware of the risks of this animal.

Now, over 50 years later, ranchers and farmers are again raising their concerns over the threat these deer pose – especially in light of recent flurry of reports of deer in areas dominated by local agriculture.

Islands typically rely heavily on imports, but Hawaii has been working toward greater food sustainability. That means protecting agriculture from the axis deer is a battle the state must win. Using the state’s hunters as a way to control the axis deer population will surely help. It’s a tactic that is used in suburban areas of many states in the lower 48 and it has proved to be successful. It’s the hunters who will save Hawaii from the invasion of the axis deer.