How to Find the Right Draw Weight

Yanking a heavy bow back is a badge of honor for some bowhunters. However, if you shake like you’re suffering... 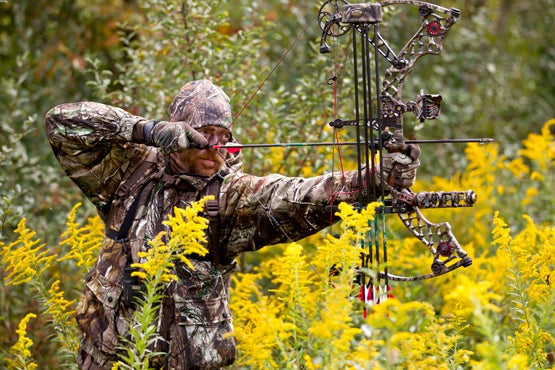 Yanking a heavy bow back is a badge of honor for some bowhunters. However, if you shake like you’re suffering from hypothermia when drawing or holding your bow, consistent arrow groups will elude you. But here’s the good news: Diagnosing an over-bowed archer (one who’s drawing too much weight) isn’t difficult.

▶ Using Too Much Bow? Being over-bowed manifests itself when the shooter is attempting to settle into the end of the draw cycle (commonly called the back wall). Once there, too much draw weight causes the shooter to struggle with the bow, physically fighting to steady it. The sight pin is rushed to the target before the release. Cool weather and the sheer excitement of drawing on game can compound the problem.

▶ What’s the Ideal Draw Weight? If you’re a seasoned archer, it’s a matter of honestly evaluating whether you’re comfortable. If not, the solution is as simple as taking a couple of turns off your limb bolts until you’re drawing steady and holding shake-free. Even when turned down, modern bows are capable of screaming arrow speeds.

▶ Making Adjustments: Compounds are easily adjustable for draw weight, typically in a 10-pound range (depending on manufacturer; see the chart below for guidelines). A 60-pound bow, for instance, in most cases will adjust from 54 to 64 pounds; a 70-pounder, 64 to 74; and so on.