How to Blood Trail and Track Wounded Deer

Tips for making a speedy recovery when trailing wounded whitetails 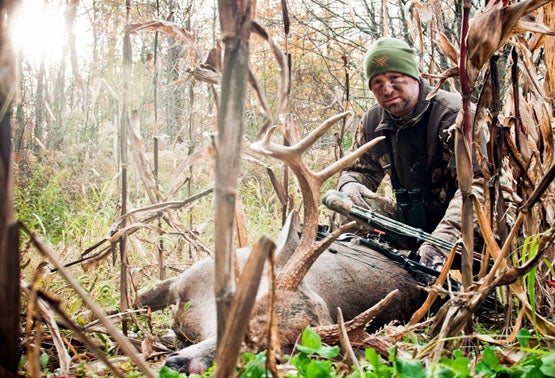 The shot looked perfect. An hour after making it—on a large Minnesota whitetail that had come running to the sound of my rattling—Pat Gaffney with RAM Outfitters and I inspected the blood-soaked arrow found a few yards past where the wide-racked buck had stood. It had been a complete pass-through.

We’d barely walked 100 yards when Gaffney shouted, “There it is!” The problem was, it wasn’t dead. The buck leapt from cover and sprinted downhill. Blood saturated the ground where the deer had bedded, but a short distance farther, it disappeared altogether. With a regret I still feel today, we never did find that deer. But thanks to Gaffney’s amazing tracking skills—much of it hinged on identifying a turned leaf here or there and a keen understanding of the terrain and how deer travel it—he kept my chances alive much longer and actually picked the blood trail back up, trailing the buck at least a half mile before losing it for good at a wide creek.

While I didn’t hit the buck as well as I thought I had, the effort put into trying to find it was exhaustive and, in most cases, would’ve produced a trophy at the end. For deer hunters, especially bowhunters, learning to read blood and other sign is an essential skill that must be developed to responsibly retrieve game. Deer are tough, and while hopefully few hunters will have to go through what I did last season, the fact remains: Hunt long enough and you will have to track a wounded deer.

Here are the keys to reading the sign that will help you find your trophy when it really counts.

Observe the Shot
Try to identify precisely where the arrow struck the animal, as this will provide the first indication of how well it is hit. A hit in the leg, too far back, or too high means you need to wait at least three or four hours before even attempting to track the animal. A good, broadside hit in the vitals means you can get on it anywhere between 30 minutes and an hour. Watch the deer until it disappears from sight. Note the direction it was heading. If blood is not found immediately in the spot it was hit, knowing which way it ran can start your search in the right direction. Identify a landmark near the last place you saw it from your stand. Note how it was running. If the deer was stumbling, it could mean a lethal hit; if it was limping, it could mean a leg shot; and if it was hunched up, it could mean a gut shot. Try to determine if your arrow passed through the animal. A pass-through shot should translate into more blood and a shorter tracking job. Listen to hear if the deer collapses.

Telltale Blood Clues
Blood is the best evidence of how well a deer is hit, and often provides the most visible trail to recovering the animal.

Pinkish, frothy blood with small bubbles typically indicates a lung shot that will prove lethal in just a short distance.

Rich, bright-red blood can be from the heart or from any large tissue area fed by numerous blood vessels. The more blood, the better the indication of whether the shot was fatal. Sparse, bright droplets may simply indicate a non-lethal wound such as a hit in the leg or the brisket.

Dark, almost burgundy-colored blood may indicate a hit in the liver or kidneys. These shots are lethal but take longer to kill the deer. Wait two to three hours before tracking. Blood that has a greenish tint or has small plant matter mixed in generally indicates a stomach shot. These shots are ultimately lethal, though it may take a long time before a deer succumbs. Wait at least five hours before pushing on with the search.

Blood droplets from a walking deer are more uniform in size and have minimal splatter. If a walking blood trail becomes erratic, the deer is close to collapse. Keep a sharp look ahead for its body. Droplets from a running deer will splatter more, with the fingerlets of blood striking the ground in the direction the deer is traveling.

More Blood Evidence
A wide blood trail—2 feet across or wider—with lots of large droplets indicates a pass-through shot that struck the heart or a major artery. The spray of blood is caused by pumping blood.

Blood in a narrow trail that looks like it is to one side of the deer’s path of travel indicates a shot where the arrow did not pass through. Blood is leaking from the entry wound and will be harder to trail than that of a pass-through shot.

A deer might not bleed much initially until the body cavity fills and begins leaking through the wound(s). Severed chunks of lung or other vitals can also block a hole that may work free as the deer travels. If no blood is initially found, work back and forth in a wide, sweeping arc for at least a hundred yards in the direction the deer ran off.

Hair Samples
Hair can also provide a clue as to where the deer was hit, and will often be found on the ground in the area where the deer was first struck by the arrow, at fence crossings, and in spots where a deer falls or lies down.

Hair high on the body along the back and spine will typically be coarse, hollow, and almost grayish in color with dark tips. Find this hair and it could be a lengthy tracking job since if you had hit it in the spine, the deer would likely have collapsed on the spot.

A good hit on the side of the body will sheer hair that’s brown and not as coarse as back or chest hair, and it’ll have lighter tips.

Coarse brown hair with black coloring right at the tips could mean a leg shot.

White hair indicates a possible low shot, though if the hunter is shooting from a steep angle, it can simply be where the arrow exited the body after passing through from a high angle on the opposite side. A pile of cut white hair might mean the arrow simply sliced the stomach as it passed too low. Find your arrow to confirm if there is blood all the way around its diameter.

An approaching rain- or snowstorm can dictate how aggressive a hunter has to be in tracking a wounded deer. If a storm is on the way, stick with the trail even if you haven’t waited as long as you think you should have.

No more than two people should initially track the deer: one intently working the trail of blood, the other circling the nearby area to seek out new directions the deer has taken or more blood sign that can speed up the search. Too many people involved in a search increases the odds of someone trampling over the sign needed to trail the deer.

Leave a piece of toilet paper or flagging tape at each spot where blood is found. This not only establishes a pattern of travel to follow should the blood trail be lost, but also provides a point to pick back up should you have to put off the search.

In the absence of blood, look for other small details, such as kicked-over leaves or rocks. On bare ground, look for tracks that don’t match the others, such as one that was made from a sliding hoof or is splayed wide as if the animal took off running. If all else fails, use binoculars and look for the entire deer, which just might be lying amid cover.