Bowhunting: How to Find Your Bow’s Maximum Effective Range

▶ All bowhunters have an effective range, or more appropriately put, a maximum shooting distance that lies within their comfort... 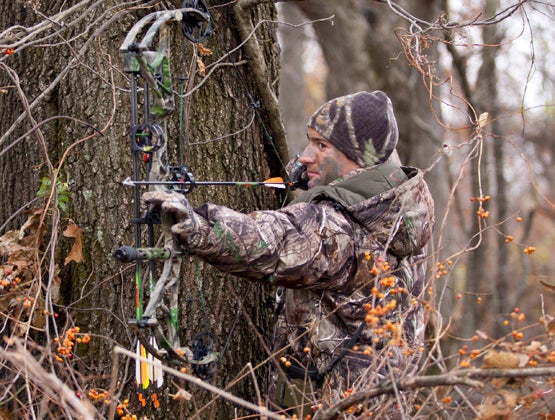 A bow’s effective range is determined by two factors: arrow speed and the kinetic energy at impact. The laws of physics dictate that as an arrow travels downrange, its trajectory decays as gravity and aerodynamic drag affect its flight. Every compound delivers arrows at a defined speed at certain target distances.

So if you can determine how a bow performs at different distances, you can make an educated decision on how far you can effectively shoot at game. To define your bow’s effective range, we’ll use the sight pins. When we’re done, you’ll know the specific range of distances at which each pin is capable of delivering a lethal shot. A Simple Calculation

▶ The kill zone on a whitetail standing broadside is roughly an 8-inch circle. An arrow placed anywhere in that zone will result in a deadly shot. An arrow delivered outside that strike zone will be non-lethal.

Mark the 8-inch kill zone on your target. Shoot at the kill zone from 20 yards with your 20-yard pin. Your first arrow should hit dead-center in the 8-inch zone, since your pin is sighted in for 20 yards. Now move forward 1 yard and shoot again. Keep moving 1 yard closer to the target with each shot. At a certain distance, you’ll notice your arrow hits above the kill zone. At this distance, you have exceeded your 20-yard pin’s ability to deliver a lethal arrow. Write down that distance.

Now repeat, starting at 20 yards and moving back 1 yard with each successive shot. At some point your arrow will drop out of the kill zone. Write this distance down. Now you have a range of yardages at which your 20-yard pin is capable of delivering an arrow. Repeat this process for each pin.