Neil Dougherty, a deer hunting and management consultant with NorthCountry Whitetails, looks at more than 100,000 trail-cam photos each year... 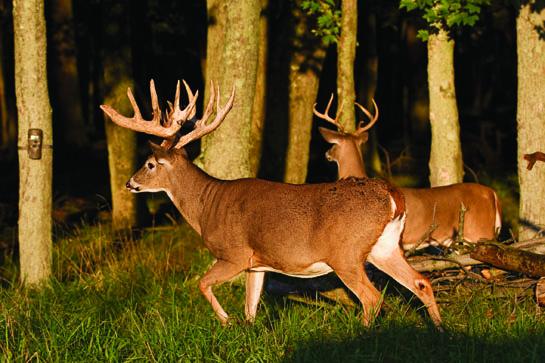 Neil Dougherty, a deer hunting and management consultant with NorthCountry Whitetails, looks at more than 100,000 trail-cam photos each year from all over the country. But he’s not just searching for big antlers. Each season he conducts an informal deer behavioral study, and over time he’s been able to pick up on subtle body language that can sometimes hint at how to kill a mature buck.

1 – The Loner
Here’s a fully mature buck walking into a field by himself in late summer, when most bucks are usually running in bachelor groups. A handful of photos of this deer trolling by himself indicate that he doesn’t have any interest in buddies.

How to Hunt Him: Don’t try calling or rattling to this deer. Figure out his feeding pattern and try to intercept him when the wind is right. According to Dougherty, the odds are on your side. Because this buck runs solo, you won’t have to deal with all the does and young bucks that are so good at blowing up your hunt.

2 – The Poser
This young buck is a tough guy, or at least he’s trying to act like one. The shadows on the buck’s shoulder show that his hair is up, and he looks like he’s ready to pummel the other deer. But his flagging tail indicates that he’s insecure in his position and is not really ready to throw down just yet.

How to Hunt Him: This photo hints that the rut is getting started but is not in full swing. Try some doe bleats or soft-grunts, but leave the more confrontational snort-wheeze for later in the season.

3 – Mr. Cool**
This is a mature, 4-year-old buck feeding alongside does. His ears are square, and the doe in front of him is crouching in submission. But she’s lined up head-to-head with him. This wouldn’t happen if the rut were on. This photo indicates that the party (the peak rut) is over, Dougherty says.

How to Hunt Him: Think post-rut. This buck is now interested in food, but he’s showing up in the field well after shooting light. Your only chance is to go backdoor on him and try to catch him between his bedding area and the food source.

4 – The Real Deal**
This buck is barely paying attention to the other deer. His neck is puffed up and his ears are laid back to show dominance. He’s the man. This buck doesn’t need to raise his hair or tail, because he’s probably already whipped every challenger in his territory–and likely in others.

How to Hunt Him: This buck is probably the most dominant deer in the area. Dougherty suggests hunting social gathering areas and tickling rattling antlers together. If that doesn’t work, hit him with the snort-wheeze, the deer equivalent of, “You throw like a girl!”