When Your Job is to Hunt

I’m an avid hunter. It’s all I think about 365 days a year. Where to place stands, what food plots... 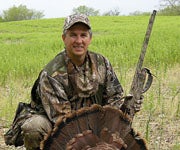 I’m an avid hunter. It’s all I think about 365 days a year. Where to place stands, what food plots to plant, where to hunt, when to take vacation – hunting is my life.

Realtree’s David Blanton (pictured) has been living the dream for as long as I can remember. As executive producer and host of the company’s T.V. show Realtree Outdoors, as well as producer of the infamous Monster Bucks series, Blanton’s job is to hunt and think hunting all year long.

Blanton was recently interviewed on NewsOK.com and shed some light on what really goes on behind the scenes. While he admits he has “an incredibly phenomenal job” it doesn’t come without a cost. Blanton said during the first few years, his job became the most important thing in his life – more important than his family.

It’s something I think a lot of hunters deal with, myself included. With opportunities to bowhunt whitetails from Sept. 15 through Jan. 31, I just about drop off the radar. My friends know it’s hunting season when I stop calling them, my family sees me less and the only reason my fiance knows I’m still alive is because I come home after each day’s hunt to prepare for the next morning. Hunting isn’t my job so there’s only two weeks when I completely disappear. For most of the season I’m a weekend warrior.

Blanton says he’s gained focus and reshaped his life’s priorities since he started with Realtree. Of course the fall is busy for anyone in the outdoor industry, but Blanton chooses to hunt about 60 days during the season. “I could be gone every day in the fall if I chose to be,” says Blanton. Over the years he’s learned to pace himself and come home to spend time with his family for several days between trips. Not only does it help keep his passion for hunting alive, but also gives him time to spend at home with the people who mean the most to him.

When asked how often he hunts when he’s not filming, Blanton answered, “I don’t.” The only time he really steps into the woods when he’s not working is to take a first-time hunter or child hunting during the spring turkey season.

I think there’s something we can all learn from David Blanton’s experiences. There’s more to life than hunting. Wow, I said it. Sometimes it’s just as important for us to take a step back, take a look around and slow down. We don’t have to be in the woods every second of every day for the entire length of the season. What we have to do is make sure we spend time with our family and close friends. Those are the people who will be there for you when you need their support and they’re the same people you can’t afford to completely abandon each fall.

This fall I’m going to do something different. I’m going to keep my family and friends around during hunting season.