Alaska is such a well-known dream destination for caribou, bear, moose and sheep hunts that people forget the state is... 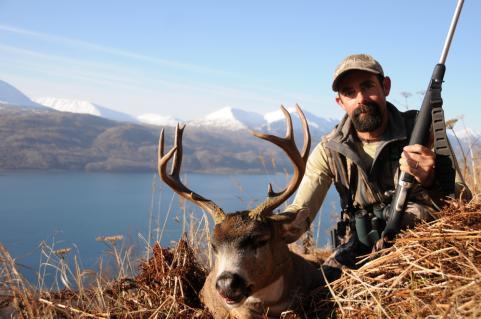 Alaska is such a well-known dream destination for caribou, bear, moose and sheep hunts that people forget the state is also home to pretty good numbers of Sitka blacktail deer. Actually, in southeastern Alaska, Sitka’s are the most pursued big game species, with approximately 12,000 harvested annually. The two biggest deer regions are Kodiak Island and Prince William Sound. Both herds took a hard beating from the most recent winter.

“This winter was a very harsh one [on Kodiak Island], with near record snowfall and colder than average temperatures,” said John Crye, an Alaska Department of Fish and Game (DFG) wildlife biologist for the region. “The winter kill was more severe on the northern half of Kodiak island and the western side of Afognak. The remaining parts of the archipelago should see good hunting this fall.”

Deep snows and low temps were bad in the Prince William Sound area too, said DFG biologist David Crowley. “I expect that we lost 50 to 70 percent of our deer,” Crowley, said. “I also expect that fawning was below normal.”

At the same time, though, Crowley notes, “Season and bag limits will remain the same, because hunting has little impact on the population.”

The good news is that these winter deer kills also mean that forage will be in good shape because of less browsing. So, the deer that made it out of the winter are now eating very well! And while Sitka’s were introduced into Alaska, the deer have adapted well to the population ups and downs from severe winters.

“Deer will bounce back quickly given a couple of mild winters. This cycle is typical for deer here, living as they do on the northern extreme of their range,” Crowley said. In both these regions, the prime rutting period runs from November 1 to November 10.
**
The Western Regional Report**
_A very dry summer in the Southwest shriveled up forage and made it hard for does to successfully drop and raise fawns. However, new deer browse is starting to appear in the burned-over areas from 2011’s wildfires in Arizona and New Mexico.