Making Sense of the World-Record Whitetail

The whitetail deer world is holding its collective breath as official scorers for the Boone and Crockett Club gather this... 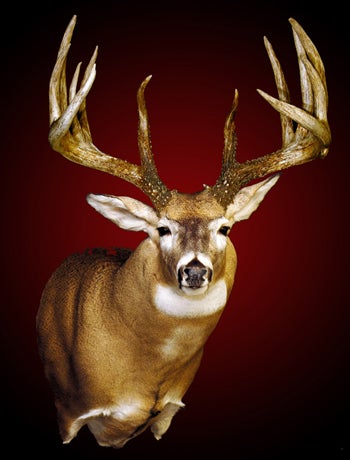 The whitetail deer world is holding its collective breath as official scorers for the Boone and Crockett Club gather this weekend in Missoula, Montana, to finally put a tape measure to what could be the next world-record buck.

Panel scoring for Johnny King’s remarkable Wisconsin whitetail, killed in 2006, will be held Saturday, Sept. 22, and we’ll provide updates as we know them over the weekend.

At issue–and the detail that could allow the King Buck to topple Milo Hanson’s legendary Saskatchewan buck as the world-record whitetail–is whether the King Buck should be scored as a typical or a non-typical rack. Does its right G3 point express characteristics of a typical point or a non-typical point? The difference, as Tony Hansen explains, could result in a swing of more than 30 inches of measurement.

Because the definition of this single dubious point essentially comes down to an interpretation, the B&C Club is convening a panel of official scorers to collectively measure the rack. Will we be crowning a new world-record whitetail by next week? Stay tuned.

Did Our Love Affair With Symmetry Doom the King Buck?

Milo Hanson’s remarkable Saskatchewan buck, a clean 6×6, scores 213 5⁄8. It is the reigning world-record typical whitetail. But should that title be handed to the King Buck?

Killed by Johnny King in Wisconsin in 2006, this whitetail appears to be a massive, long-tined 6×6 typical. No drop tines. No stickers, flyers, or trash. Scored as a typical, the buck reportedly could score 215, easily surpassing Hanson’s all-time mark.

But it’s not a typical–at least not according to Boone and Crockett’s scoring system.

Why? Because the buck’s right G3 is classified as sharing a common base with the G2, it is defined as an abnormal point. That means the left G3 does not match the right, and thus the buck must be scored as a typical 5×5 and penalized nearly 35 inches in antler mass. Pulled from record-book consideration by its owners, the King Buck’s unofficial B&C typical score is around 180 inches.

Read more about Milo Hanson’s record buck, or a bit more about the history of scoring bucks.