The History of B&C Antler Scoring

On your way to meet a buddy, you see a big buck hauling tail across a field. Here’s what you’d... 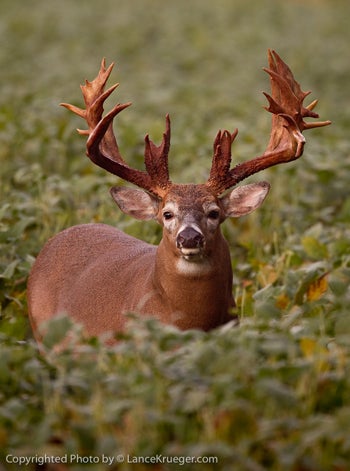 On your way to meet a buddy, you see a big buck hauling tail across a field. Here’s what you’d likely say upon ​arrival: “I just saw a hoss! He’d easily top 150.” Interpretation: A “hoss” is a big deer. That’s pretty straightforward. And “easily top 150”? That means the buck sports antlers that carry 150 inches of mass (or more likely 140 inches, since we hunters routinely overestimate headgear dimensions). But does that mean the buck would gross 150 inches? Or that he’d net 150?

Here’s an even better question: Why do we even bother differentiating between the two? The answer lies in the past and carries a touch of personal bias. In the early 1900s, as America was deep in the throes of Westward expansion, it was widely assumed that big-game populations would simply be extirpated as a cost of doing business. This prompted William T. Hornaday and other prominent members of the Boone and Crockett Club to begin assembling the National Collection of Heads and Horns at the Bronx Zoo in New York City, to preserve exceptional examples of the big game that once thrived on the landscape.

Although the predicted extinction of big-game animals was not realized for most species, the movement was under way to formulate a system for recording and evaluating big-game specimens.

In 1932, Boone and Crockett released its first big-game record book, in partnership with the National Collection of Heads and Horns. The scoring system was simple: a single measurement of the length of the longest antler, plus a basal circumference measurement. In 1939, the club released a second book using the same scoring system. But this edition included chapters by renowned hunter Grancel Fitz that introduced a new scoring system that was similar–yet different in key areas–to one being used by a Dr. James L. Clark for his popular big-game competitions.

▶ The Basis for Symmetry
In 1949, Samuel B. Webb, a prominent B&C member and friend of both Fitz and Clark, was tapped to head a special committee tasked with establishing an objective and fair system for scoring antlers and heads. The committee included Fitz and Clark, whose systems were similar in that each system recorded tine length, circumference, and antler spread. The difference was in the importance each placed on symmetry. There was a very clear bias as to how antlers should look–and it was all about perfect symmetry. The left antler should look like the right antler. If not, penalizing deductions should be taken.

Why so much focus on symmetry? It was a matter of biology. When the Boone and Crockett Club began to record antler scores, it was truly a system for documenting a vanishing resource. The big-game records were in place to record biological data, and biologists–then as now–used antler quality as an indicator of overall health. Thus, deer displaying the most typical antler traits of mass and symmetrical tine growth were afforded higher scores. Without accounting for symmetry, it was feared that bucks showing irregular, non-typical antler growth (possibly as a result of disease or stress) could score higher than healthy typical bucks.

Both Fitz and Clark had systems for accounting for asymmetry. Clark’s system tallied each side of the antlers and then subtracted the difference from each side’s measurement totals for the final score. Fitz’s system subtracted the side-by-side differences for each individual score (if the left G2 is 2 inches shorter than the right, deduct 2 inches).

It was this difference that caused the most controversy. Clark’s system, it was argued, didn’t suitably punish an especially asymmetrical rack. In theory, a buck could have major differences from side-to-side point totals, lengths, and circumferences but still total what adherents of symmetry considered a “false” score.

In the end, Fitz’s system won out and remains the basis for the most recognized method for scoring antlers. It is also a system that was designed deliberately to place a premium on symmetrical antler growth.