The quick take on Nebraska’s deer situation? Mule deer numbers are down, whitetails are up. “Mule deer appear to be... 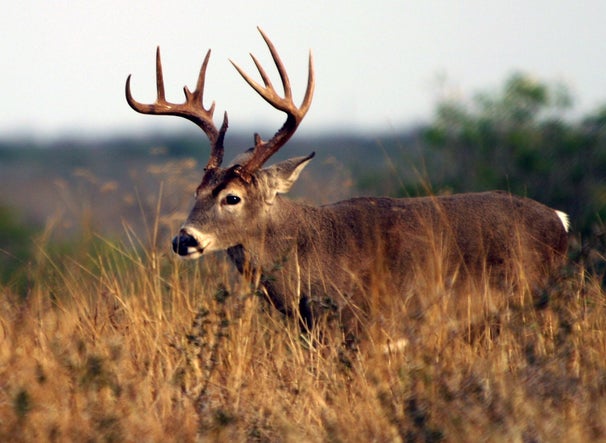 The quick take on Nebraska’s deer situation? Mule deer numbers are down, whitetails are up.

“Mule deer appear to be down about 20 percent overall,” said Kit Hams, big game program manager for Nebraska Game and Parks Commission. “Whitetail in the east are down about 20 percent, but whitetail in the central and west are up about 30 percent in the past five years. Our focus has been on whitetail reduction in the east and that has been successful. The west and central deer units have recovered from Whitetail EHD/Blue tongue losses about eight years ago and are now at record highs.”

Hams adds that mule deer declines are likely related to Meningeal (brain) worm and whitetail population increases. Mule deer with brain worm are sometimes found walking in tight circles, unafraid of humans when approached, throwing their heads and/or displaying other neurological symptoms–shortly before they die. Brain worms were suspected in the deaths of 133 mule deer in central Nebraska in 2009.

Where their ranges overlap, the more adaptable whitetails can and do outcompete mulies for food and habitat. Whitetails also can carry brain worms, which usually don’t harm the whitetails but can be spread to mule deer.

“Loss of habitats in CRP [Conservation Reserve Program] and other areas converted to cropland will impact herds negatively, too,” Hams said.

One more problem: by early August, epizootic hemorrhagic disease was beginning to kill deer in eastern Nebraska. At press time, it was too early to tell if that might have an impact on the fall hunt.

Like much of the West, Nebraska was very dry this spring and summer. “Drought is an issue, but likely won’t hurt us too much this year,” Hams said. “It’s pretty bad in the western half of the state, but [agricultural] irrigation lessens the impact in many areas.”
**
The Midwestern Regional Report**
Winter in the Midwest was mild to nonexistent, and deer herds came into spring in very good shape. However, drought could be an issue in some states. “Hard and soft mast crops will likely be compromised, and clover and row crop production is threatened by dry conditions,” says Iowa deer biologist Tom Litchfield. In parts of Indiana and Illinois, some farmers were forced to plow under failing corn or chop it up for cattle feed in midsummer. Deer numbers are stable to growing in most locales, though disease is taking a toll in several states. North Dakota is still reeling from last year’s EHD outbreak, CWD is spreading within Illinois and Wisconsin, bovine tuberculosis is still a concern in Michigan’s Lower Peninsula, and Nebraska and Missouri experienced EHD outbreaks this summer.