It was Aug. 18, opening day of the Utah Mule Deer season, as Brad Bentley made his way through the... 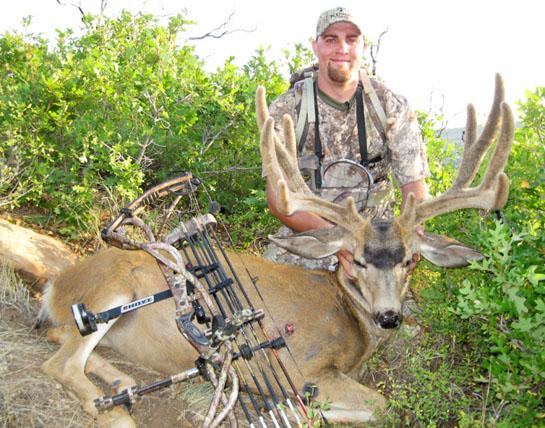 It was Aug. 18, opening day of the Utah Mule Deer season, as Brad Bentley made his way through the mountain range knows as the Book Cliffs. The summer had been brutally hot and dry with temperatures in the low 90s. Sporadic cloud cover wasn’t going to make this hunt any easier.

Bentley had made several trips to the Book Cliffs before the season to scout the area with some friends and put together a hit list for the upcoming season. There was one buck, however, that stood out to Bentley and other hunters in the area. The big 5X5 was out past his ears with good mass and long tines. The forked G2s were shorter in the back than in the front, giving this buck a distinct look. Bentley estimated the buck was a 170-class mule deer.

He knew of some bigger bucks in the area, but said, “I learned a long time ago that with a bow in your hand [you] don’t pass on the first day, what you’d settle for the last day. In other words, take what opportunities are given to you.”

It was early evening when Bentley spotted his target buck and it was time to come up with a game plan and close the distance. “I had reached the point in my stalk when I knew that I should be getting really close to within shooting range. I was hidden against the back edge of a big flat boulder [so] I slowly peeked over and there were two decent bucks feeding at the base of the rocks–one was my target buck,” he said. “I had a pretty good idea of how far they were and didn’t want to risk taking the extra movement of pulling out the range finder, so as I drew back and started to stand up my eyes met with the smaller buck who had me pegged.”

Bentley watched as the buck ran off through the brush and was overcome with frustration thinking the game was over. He peeked over the edge one last time and was shocked to see the bigger buck still there and looking in the direction of the other buck that had just run off. Without a moment to loose, Bentley drew back, took one step forward and estimated a 40-yard shot before letting the arrow fly.

“My nerves were an absolute mess and my knees [were] violently shaking,” said Bentley. “I couldn’t believe what had just happened, I had just finally arrowed ‘my buck’ and was fortunate enough to watch him go down, he was dead before he knew it.”

With the buck down in sight, Bentley made his way to the muley and knelt down beside the deer, wrapping his hands around the heavy, velvet antlers for the first time. It had been five years since Bentley took a buck and he said a sense of accomplishment, appreciation and respect overcame him as he admired the fallen animal. With a green score of 160 inches, Bentley’s muley is a buck any accomplished hunter would be proud of.