Patrick Paysinger entered his Kentucky woods on the afternoon of Sept. 1 following a heavy rainstorm. Seeing that it was... 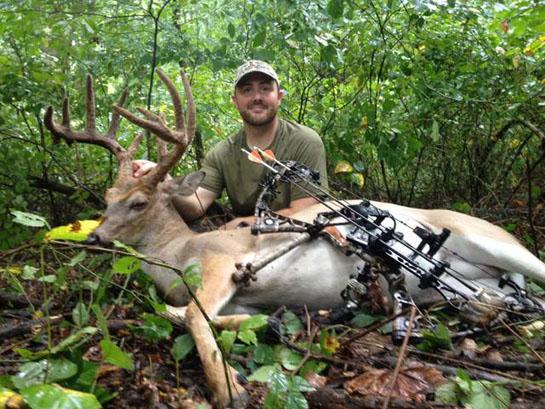 Patrick Paysinger entered his Kentucky woods on the afternoon of Sept. 1 following a heavy rainstorm. Seeing that it was clear on the radar following the storm, Paysinger knew this was the time to be in the woods.

By 4:15 p.m., Paysinger was settled on his deer stand and watched as the sun broke through the clouds. The temperature was in the 80s – nothing like a hot, humid early season hunt.

Paysinger was confident that the deer would be moving after the heavy rains and it wasn’t long before he saw deer moving through the woods. It was about an hour later when Paysinger caught velvet tines bobbing through the brush. A good G2 on the buck’s left side confirmed this was a shooter and Paysinger never looked at the buck’s antlers again.

Paysinger came to full draw as it turned down a trail leading to a bean field. When the buck stepped into his shooting lane, Paysinger released the arrow. The shot felt really good, but the buck did not go down in sight. It was at this point that the second-guessing began. As the adrenaline rush set in after the shot, all he could think about was if the arrow hit its mark.

After an hour and a half had passed by, Paysinger decided it was time to climb down and find his arrow – the first piece of the puzzle that would either confirm his doubts or solidify his success. The arrow was soaked in blood and things were looking up. The first 30 yards of the blood was easy to follow, but the trail mysteriously ended. With darkness quickly approaching Paysinger had to make a choice – continue tracking the deer into the night or mark the last spot of blood and return in the morning.

Paysinger returned the next morning with four others to track the deer. They picked up the blood trail and followed the deer into the thick brush. Paysinger’s buck was a short 50 yards away.

With only a quick glimpse of the antlers the night before, Paysinger had estimated the buck as a 130-class deer. He was pleasantly surprised that it was closer to the 150-inch mark. The big symmetrical buck was still in velvet, a first for Paysinger, and carried 10 points on his rack with its G2s and G3s being the longest.

The most memorable part of the hunt for Paysinger was having his cousins and nephew on the recovery. It’s what made the end of this hunt that much sweeter.