The early muzzleloader season was a good time for Aaron Milliken to be in the woods. It was September 20... 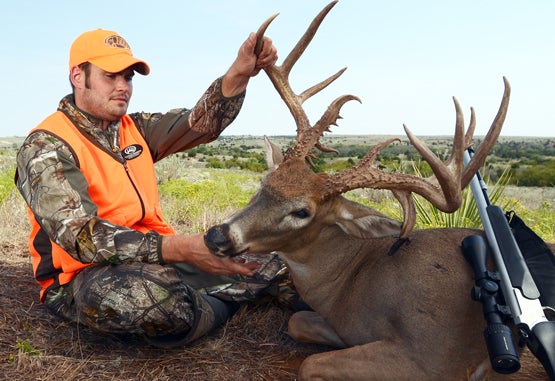 The early muzzleloader season was a good time for Aaron Milliken to be in the woods. It was September 20 when Milliken set afield with his Thompson Center in Lyon County, Kansas. The evening was comfortable by Kansas standards, a welcome change from the typical hot early fall days.

In these flatlands, the wind plays an important role in the hunt. On the 20th, an east wind caused a slight change of plans for Milliken and had him headed to a different stand on a field edge for the evening hunt. He targeted a field that his friend, Heath, had glassed a few nights prior–spotting two giant whitetails that seemed to be stuck on their early season patterns.

Living in west-central Illinois, large bucks became Milliken’s focus pretty quickly and his standards in Kansas were high. It was late in the evening when he spotted a buck that he quickly judged to be in the 180-inch range. With strict management goals of only shooting 5-year old bucks on this farm, Milliken knew this deer would easily fit the bill. The wind was perfect and with the buck at 140 yards, Milliken squeezed off a .50 caliber round and quickly got engulfed by the smoke from the muzzleloader.

Without being able to see the deer after the shot was fired, Milliken slowly made his way to the spot where he shot the deer, but blood was nowhere to be found. Milliken knew his gun was dialed in and felt good about the shot, but with no sign at the site of the hit, he headed to his friend Heath’s house to go over the events and get a second opinion.

Convinced his hit was good, Milliken returned to the field to pick up where he left off and was determined to find his buck. It wasn’t long before Milliken had antlers in his hands.

“When I grabbed him I was immediately overwhelmed by the number of points he had on his bases and his overall spread,” Milliken said. The buck had a 160-inch-plus typical frame with stickers and drop tines making for another 34 inches of antler to give this brute a gross score of 194.

When Milliken reviewed the trail cam pictures, he ended up having hundreds of pictures of the buck he shot including a picture before and after the shot. To top it off, Heath had a shed from the buck as a four year old and had actually passed him up during the previous archery season as a 150-inch buck.

It just goes to show that sound management skills, patience and a little bit of luck go a long way in the deer woods. This surely won’t be the last giant whitetail that falls to Milliken and his crew.