Alexa Armagost, 15, shot this 10-point 174-inch buck while hunting on her family farm during the Wisconsin youth hunt. A... 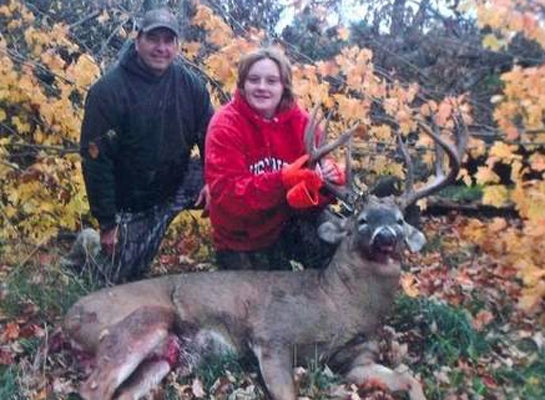 Alexa Armagost, 15, shot this 10-point 174-inch buck while hunting on her family farm during the Wisconsin youth hunt. A measurer from the Wisconsin Buck and Bear Club said Armagost’s deer is the third largest ever taken in Wood County, according to the Wisconsin Rapids Tribune.

” ‘That’s the biggest buck I’ve ever seen in my life, actually,’ Armagost said.
_
Alexa and her dad had seen other deer during their hunt, but Alexa was holding out for the big one they spotted earlier. She wasn’t all that confident she would get the deer.

‘It was an older buck, so I wasn’t sure if I would get it or not,’ she explained.

When she saw the animal, she didn’t have time to get nervous, she said. She aimed and shot.”
_
Now Armagost is gearing up for the Wisconsin gun season which starts November 17.

“It will be hard to beat this deer,” she said.