Shane Ragon, 40, was supposed to be hog hunting earlier this month when he spotted this massive buck across a... 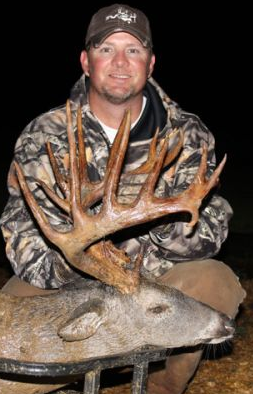 Shane Ragon, 40, was supposed to be hog hunting earlier this month when he spotted this massive buck across a field. Ragon was posted up behind a power pole the evening of October 6 and glassed the buck about 400 yards away. He quickly changed the species he was targeting.

Slowly, the buck worked its way toward Ragon following a doe and two yearlings.

“Then the doe got to me, and walked past with the two yearlings,” Ragon told the Mississippi Sportsman. “I was freaking out because I knew if she saw me it was over. I was looking out from behind the pole with only one eye. She kept walking, and the other deer kept coming, but he was well behind them.”

Eventually the does did bust Ragon and the buck held up at 35 yards, tail up, ready blow out.

“I put my top pin on the top of his back, just behind the shoulder, lowered it a couple of inches and hit the release,” Ragon said.

The buck didn’t run far, and soon Ragon was holding the massive rack in his hands. The deer green scores 203 5/8 inches and is basically a main frame 7×7 with 12 sticker points. The buck will likely go down in the record books as the third largest nontypical ever taken in Mississippi.