The Rut Tracker 2012: Don’t Get Aggressive Just Yet

If I had one message to send this week to Outdoor Life deer hunters around the country, it would be:... 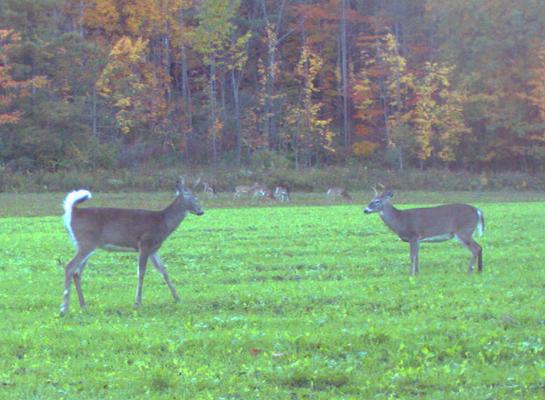 If I had one message to send this week to Outdoor Life deer hunters around the country, it would be: “Don’t rush the rut–just yet.” We’re still a few weeks off, gang, and adopting rut hunting tactics now can do more harm than good. Buck behavior is still being dominated by feeding even though some soft signs of the upcoming rut are starting to appear.

We are seeing more sparring by young bucks and more aimless walking about by young bucks, but the old timers are largely nocturnal–their tarsal glands are still relatively unstained and we have seen very little in the of way dominant behavior by bucks. Buck groups are still hanging together but scrapes are starting to show up in some quantity.

We have seen no evidence of the forthcoming rut in does or fawns. No single does nervously running about, no fawns looking for momma and no abandonment of food plots and staging areas by does and fawns. Things are still orderly and peaceful in their world. We have always believed that doe behavior is key to tracking the rut. It is one of the strongest rut markers discussed in our new book and in the Outdoor Life feature, “Rethinking The Rut.” Buck behavior can be all over the place, but if you want to know where you are in the rut’s progression, watch the does.

We have seen an uptick in older-age bucks on our cameras, we picked up 3 new bucks this week and we were able to identify another shooter this week. He appears to be 4.5. We now are looking at two as the one who disappeared two weeks ago is now back. He was on camera 4 of 7 nights and has my son, Neil, smiling again. If we can ever pin him down we will start hunting him.

We have also had a number of serious rut reports from the field of bucks urinating on their hocks and tarsal glands, grunting while walking around, lip curling and bothering does and more and more scraping being reported. But, over the years, we have learned that our rut watchers tend to report more rut soft-rut evidence.

When A Chase Isn’t A Chase
In the interest of improved communication I have started a conversation around what constitutes a chase. I feel as if it would be beneficial to differentiate between a testosterone-driven chase and an estrus-driven chase; the latter being much more intense, longer lasting and sometimes violent. Some of you have reported a testosterone driven chase to resembling more of a bump or flush than an intense event and not the chase we have traditionally associated with breeding. What say you? Is there a difference? We’d love to hear your opinion.

So, if the rut is still a few weeks ahead, where are we? The majority of our reporters still believe that food sources hold the key. Find the feed and you’ll find the deer. Last week I whined about losing my deer and complained that they had left our green plots for browner pastures (acorns). Sure enough, the very day I wrote the report, they returned. I hunted green plots with a friend that night and we saw more than 20 deer. This pattern held all week and sightings averaged 8.4 deer per hour. Every sighting included bucks that divided their time between feeding and bumping does. Contrast this with 3 goose egg sits the week before and average sightings of less than one deer per hour on green plots.

Our cameras reflected the return to green as well. Our green plot camera photos were up 80% from the 2 weeks prior. We logged approximately 2,300 photos on a single green plot last week while not breaking 100 in a few setups in acorn areas. A little rumen investigating last weekend told the same tale.

This does not mean that the deer you hunt are not on acorns or soft mast. It simply means that they are still food driven and on our 500-acre Kindred Spirits property they have cleaned up the acorns and soft mast and are back on the green. There is some standing corn nearby and they will shift to that later in the season if it is still available.

How To Hunt This Weekend
As far as strategy is concerned, food is still where it’s at. Neil spent part of the weekend with clients in NY’s northern most Adirondack Mountains and reports bucks using the green plots they planted last spring. No fighting or messing around with does, just feeding and packing on the pounds for the upcoming rut. And boy did they pack them on! They managed to hang two bucks on the meat pole and both tipped the scales at slightly over a cool 300 pounds live weight. These bucks and the other bucks they saw were in tip-top condition and had yet to run off a single pound by missing a meal or bothering does.

Even though most whitetails are still food driven, the need to feed is beginning to wane in bucks. They have literally been in a feeding frenzy since late summer but are now entering a transition period between trying to pack on the pounds and reproduce the species. They are becoming harder to pattern on food then they were a month ago. They are reorganizing themselves and the sightings can get pretty random. They are not doe crazy yet so there is no payoff in pressuring them or invading their core areas. This is a tough time for hunters chasing mature bucks. They still have their wits about them (no rut fever yet) and are easily alerted to hunter pressure.

Scrape hunting could be a good play next week, but hunters would be wise to realize that research indicates that 80% of scrapes are made at night, especially scrapes made on highly visible areas like field edges and other open spaces. Staking out scrapes with a camera will tell you when they are being used and help you be there when they are.

We’d like to recommend you stay out of the woods and rake leaves next week, but that’s not going to happen so we will remind you to tread softly and keep the rattling horns in the garage for another week.

We’ll hunt food this week and maybe take another doe or two for the freezer. We won’t hunt the core of our property or any areas that we feel are frequented by older aged bucks. They are starting to move around and the last thing we want to do is take in the welcome mat. They will be showing up during hunting hours shortly and we’ll press them hard when the time is right.

(See the trail camera photos that illustrate the deer behavior in this report from the Dougherty’s and their contacts across the country).