The reports from the field have started to roll in and 90% of them are reporting deer behavior dominated by... 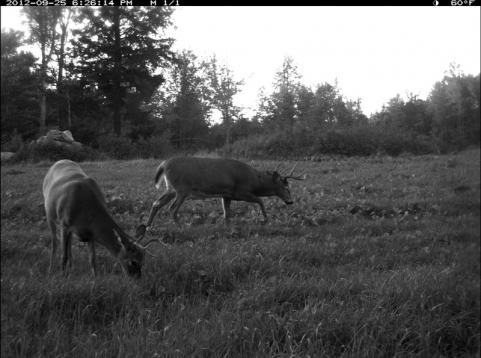 The reports from the field have started to roll in and 90% of them are reporting deer behavior dominated by a late-summer feeding pattern. It’s obvious that whitetails across the country are still busy packing on the pounds in preparation for the upcoming rut. If you are going to hunt this weekend it had better be with food sources in mind. The trick is to know what food sources to focus on and to figure out how to hunt them.

Personal Observations
Our field observations since our last report can be characterized as either “very hot or very, very cold”. I have hunted our 500 acre NY property and Neil his 200-acre farm nearby. Three of my five sits wound up as zeros in the camp log book. And no matter how you slice it, three zeros in a row are pretty darn chilly. Even though the cameras showed a marked decrease in food plot use, I persisted in checking out the property’s green food plots to be sure he wasn’t missing any food plot activity. Our green plot camera pics are dramatically down. We have pulled many of those cameras and set them up in other areas.

Neil hunted food sources as well and had the hot hand. He saw deer on green plots and soybeans all week long and even managed to start filling his freezer. The deer he hunted flocked to the plots several times during the day and each evening. Both bucks and does were really into the clover, chicory and brassicas plots.

Two properties, 30 miles apart with totally different results? What’s up with that? The answer has nothing to do with green but everything to do with brown. My property is 50% oak-dominated hardwoods and the oaks have been dropping acorns for the past month. Literally thousands of acres of oaks surround my green plots. Every sighting I had on this property last week was acorn driven. Trail cameras photos on crossings and near acorn areas were up markedly.

Neil’s property has a few oaks but not nearly enough to feed the deer using his place. The acorns have been cleaned up for a couple of weeks and they seem to be totally focused on the green plots he has planted. Lesson learned, if you want to find deer hunt them where they are; not where you want them to be.

As far as the rut goes, we are still seeing bucks grouped up and quite tolerant of each other. There has been a bit of light sparring among bucks, which ends without a clear winner, before the bucks go back to feeding. None of the deer get run off nor do they get hurt. We’ve witnessed a few stained tarsal glands and some soft scraping and rubbing behavior, but the serious rut behavior is definitely some time off. The bucks are definitely co-mingling with the does and fawns, but other than some casual interest they are not pressing the issue. Chases are testosterone driven as opposed to estrus driven and end without incident or anything close to contact. Our does and fawns are showing no rut-related behavior at all. We are still seeing older bucks co-mingling with younger bucks in buck groupings which are constantly re-organizing themselves.

We will be hunting soft all next week (and we don’t mean soft mast). The mature buck we have been trying to pattern on my place has gone ghost on us and until we get a bead on him we will be treading softly and hunting him with cameras and binoculars from a safe distance. We have not seen him or any of the lesser bucks he has been hanging with for the past two weeks.

With our soft mast all cleaned up, we will hunt acorns at my place (as long as they hold) and green plots at Neil’s, but be careful not to put any more pressure on the property than necessary. We will probably take a doe or two but be careful not to disturb the core areas of our property where the older aged bucks generally hang out. Without a shooter buck patterned, the best is yet ahead.

When it comes to rut behavior, our network of reporters has witnessed mostly the same soft indictors of the approaching rut as reported above. A few solid chases with a single buck working every doe in the field have been reported. We’ve even had a few grunting-buck chases reported.

We have also received some nice reports of hunts. Hunters staking out food sources and/or hunting travel routes to and from food sources are taking some beautiful bucks. Most of the mature bucks are still in their summer feeding patterns and are definitely huntable. The trick is to learn where and when they feed and set up accordingly.
**
How to Hunt**
This weekend, the smart hunter will be hunting food sources. Unlike me, he will have figured out what the deer he is hunting are feeding on and hunt accordingly. This may be the last week this strategy will work. Some bucks are already retreating from their summer feeding pattern and starting to think about more than their stomachs. Unfortunately, things generally get very quiet for a few weeks after they quit their heavy feeding cycle and move on to chasing. If you are hunting older age-class bucks by patterning them on food sources, you had better get it done in the next week or so.

If you don’t have the deer patterned, break out the cameras and check them as soon as possible to help you understand what foods they are working. If you know someone who has already taken a deer, ask him what was in the deer’s rumen. Skinning shed scouting is always a good approach. Your job this week is to find out what the deer are on and to hunt it accordingly.

Random sits on well-used food sources are a good way to go, but random wandering around is not. This is the time when mature bucks begin to return to nocturnal behavior due to unaccustomed pressure. They have been relaxed feeders all summer long but all of a sudden things begin to change in their world. If you are not carefully working a particular deer be careful not to “work” every deer in the woods by running all over the place. We are rapidly approaching the period in the rut cycle where the best thing to do is to do nothing or stay home and rake leaves so as not to drive every mature buck on the property nocturnal.

One more thing, keep the rattling horns and grunt calls in the garage–we’ll tell you when you can take them out. __