The Rut Tracker 2012: Severe Weather This Weekend Could Get Bucks On The Move

With the “hunter’s rut” still a few weeks off, your game plan for hunting the week ahead should be to... 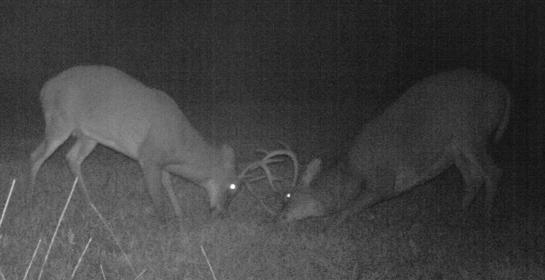 With the “hunter’s rut” still a few weeks off, your game plan for hunting the week ahead should be to stay on those food sources, but tread lightly.

The past few days have been relatively quiet here on our New York property, and contacts from all over the country are reporting similar activity. Although bucks are exhibiting some rut-related behavior, we clearly are a number of weeks away from prime time.

Statistically, we observed 6.6 deer per hour on stand this week. We stayed on food plots as our resident deer clearly remain on a feeding binge–there have been plenty of sightings to keep us awake, alert, and having fun through the entire sit. While we saw plenty of deer, older bucks were in short supply

Very few new bucks showed up on our sits or on camera and nor did the two shooters we have been tracking all fall. Behaviorally, the bucks seemed to act a little more restless and are exhibiting some soft signs (scrape making, rubs, using licking branches) of the upcoming rut. We watched numerous young bucks feeding with does and fawns that would momentarily pause, take a run at a doe or two and then go back to feeding. We call this a testosterone-driven chase or a rush-and-flush. Call it what you will, it is far from the estrous-driven chases to come. We continue to see many bucks buddied up grooming each other and then doing a little gentle sparring. The number of lone bucks that are on the move seems to be slightly on the increase. This is very typical of mid-October and very much pre-rut behavior. Buck behavior appears to be somewhere between the need-to-feed stage and the upcoming need-to-breed period.

Our cameras are starting to capture more restless-deer behavior–bucks walking through the middle of a three-acre field mid-morning and more pushing and posturing. However, we have yet to see the older aged bucks show up on film with any regularity and when they do; it is still under the cover of darkness.

Neil did observe more than a dozen does and fawns boil out of a brushy hillside this week (in small groups) as if something got them up on their feed and moving. A few minutes later three bucks showed up from the same brush hillside. They were obviously bird-dogging the hillside and ran the does out of their beds.

Our reports further indicate that 5 to 10% of you are starting to see more serious rut behavior by mature bucks. The first estrus chase of the year was reported last night by a hunter who watched four old timers show up with a doe who was being chased hard by the biggest and baddest buck in the bunch. He ran her off of the field while the others stayed behind and decided to do some intense sparring. Something about her was attracting some serious attention. Our guess is, she just may be breeding as you read this report. We expect to see a serious uptick in buck sightings by Halloween (for sure the week after). The 5% number is in line with the conception date and buck activity chart we show in our book Whitetails: From Ground to Gun.

A few does are being bred as you read this but according to the conception studies, very few compared to a few weeks from now.

Meanwhile, back road traffic is up 10 fold, hunting camps are open, posted signs are being nailed to trees, and 4-wheelers are in the woods. If you think experienced deer do not detect an increase in human activity, you are mistaken. The last thing we want to do is have one of our shooter bucks run into a hunter just as he starts moving out of his nocturnal movement pattern. It’s ironic, just as Mother Nature starts to drive the mature bucks into the daylight, increases in human activity starts driving it in the opposite direction.

Over the years, we have noticed that a hunting weekend followed by 4 to 5 days of rest will keep a property relatively fresh. No matter how carefully we hunt it, our 500-acre parcel is impacted by the pressure that weekend hunting puts on the neighborhood. Other hunters are certainly out there doing their thing. After a normal hunting weekend, Sunday evening hunts are dead and the property does not return to normal until the following Thursday or Friday. We have heard the same report from many whitetail outfitters and experienced property managers. Once the hunter’s rut is upon us, you can generally get away with more pressure but a little restraint now will pay real benefits in a few weeks. If you can hunt two days and rest five in a row until the hard signs of the rut are upon us, it should pay off. We also are only hunting mornings until rut time.

As far as hunting this week, we’re going to continue to try to keep the pressure off the mature bucks. We prefer to hunt hard when we know the big boys we are after are out and about operating in a fog of testosterone. And that will be a few weeks from now. For us, it’s a percentage game. Make no mistake, we will hunt, but there is a difference between hunting hard and pressuring deer and hunting soft and disturbing the woods as little as possible. We will probably take a few more does but we will hunt from the outside in and avoid the core areas of our property.

We know you are going to be hunting this upcoming weekend and you just might catch a buck or two with a nose full of estrus doe. So have at it. A massive cold front is making its way to whitetail country and that will be a welcome change to the relative warm weather of the last few days. This could be a decent deer movement weekend. Stay on the food and continue to tip-toe in and out of your stands. No ramming around looking for scrapes and rubs and other sign. You should already know where the scrapes and rubs will be.

We are not calling rut on or anything like that, but it could be a productive weekend especially if you are after does and younger aged bucks. The percentages of catching a mature buck on the prowl are still quite low but they will improve every day from now until sometime around mid to late November.

You should still be hunting food as the does will be there and this early in the season does are definitely buck magnets. Bucks will be attracted to feeding areas to check out the girls and fill their rumens as well.

A few of our reporters have grunted bucks in, so use your own judgment there. If you spot one which appears to be on the muscle, you might give it a try. Deer personalities vary greatly but catch one with an”attitude and just may be all over you with a couple of well timed grunts; especially if he has not heard a grunt call this season. A month from now (in heavily hunted areas) he will have been grunted at a dozen times and will most likely head the other way.