On the evening of October 22nd hunter William Telles may have dropped the new state record mule deer in California.... 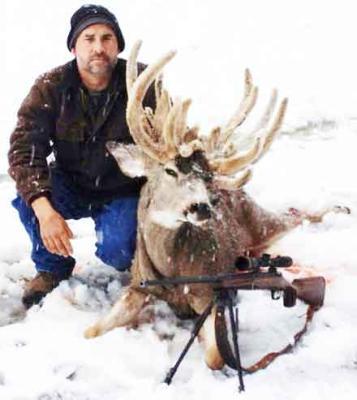 On the evening of October 22nd hunter William Telles may have dropped the new state record mule deer in California. Telles was hunting in snow-covered Alpine County with his nephew Anthony Thomasson when they spotted a large buck around 6:15 p.m. The buck was working its way along the tree line about 75 yards away. With the mule deer buck moving quickly, Thomasson whistled to stop the buck as Telles put the buck in the crosshairs and squeezed off a shot.

The official score will be announced in December.

Getting the buck off the mountain was a challenge, but how the two hunters got the buck home was both interesting and creative – the duo loaded the 265-pound buck into the front seat of a pickup and buckled it in. I’m sure that made for an interesting ride home, especially since they stopped to take a nap in the truck on the way home.