A giant buck has fallen in Central Massachusetts and it could be big enough to take the number one spot... 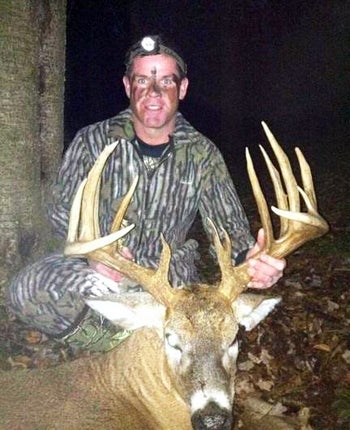 A giant buck has fallen in Central Massachusetts and it could be big enough to take the number one spot in the record books.

On November 14, Dan Daigle was hunting in his hometown of Rutland. It was just after 3 p.m. when Daigle began his ascent up the hemlock to his Lone Wolf hang-on 25 feet off the ground. The northeast wind would be perfect for this stand and carry his scent away from the direction he thought that the deer would approach.

Daigle is a scent freak and goes to great lengths to stay scent free–showering with scent free soap and wearing a carbon suit helped Daigle get an edge on the sharp nose of the whitetail.

While Daigle is a well-accomplished archer with several bucks in the 140s and 150s from his home state, the bowhunter admits, much of this hunt was luck.

In August, Daigle received exclusive permission to hunt a tract of private land. He set up trail cameras to see what was walking around the property and was pleasantly surprised when more than one shooter buck showed up–ironically, the buck Daigle killed was not one of the trail cam bucks.

After the first half hour of the afternoon hunt on November 14, Daigle reached for his grunt tube. The hunter gave out a short series of grunts followed by three doe bleats from a can call. There was no response. After another half hour, Daigle repeated his calling sequence and this time a giant buck aggressively approached the stand, breaking branches on his way in.

With the buck at 31 yards, Daigle patiently waited for the buck to change position from quartering towards to broadside. The buck closed the distance and was now 25 yards away, but a small branch blocked the buck’s vitals and Daigle patiently held off. At 20 yards Daigle had his chance and let out a doe bleat with his mouth to stop the buck. With his pin settled on the vitals, Daigle sent the G5 Montec on its way and double-lunged the brute.

As the buck ran off, Daigle watched diligently waiting for the buck do go down, but the deer disappeared out of sight before hitting the dirt. Daigle texted a hunting buddy who was a few hundred yards away to help with the search and it didn’t take long to find the arrow. The vanes of the arrow were bright red confirming that Daigle’s shot on the buck was good.

It was a short tracking job. The giant went down just 60 yards away. The hunters were in awe as they set eyes on the buck’s rack. The 201-pound bruiser carried 16 points and unofficially scores 198 2/8. The current record whitetail scores 193 3/8″ and was taken in 2002 by hunter Kajetan Sovinski in Franklin County. Daigle’s giant will be the 10th Massachusetts buck scoring over the magical 170 mark.