Jay Cremer was hunting in central Illinois when a giant whitetail made its last mistake. The 250-acre property that Cremer... 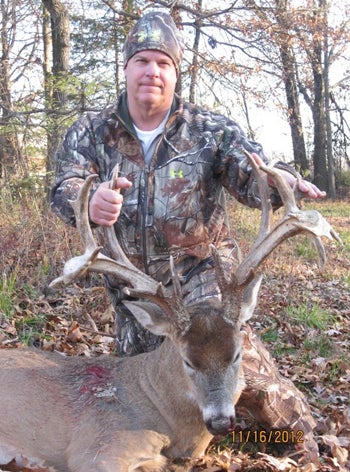 Jay Cremer was hunting in central Illinois when a giant whitetail made its last mistake. The 250-acre property that Cremer hunts has been home to many big bucks over the years, but none were quite like this.

It was November 15 and Cremer, who planned to hunt in the morning, was late getting to his stand. Once he was settled in things were slow – temperatures in the mid-50s weren’t helping. The only excitement of the morning was a pair of fawns that were hanging around his stand.

Just as he prepared to climb down and head to work, Cremer spotted a group of does with a giant buck trailing behind them. As the buck closed the distance to 36 yards, he came to full draw.

The shot looked good, but as the deer scattered the bowhunter lost sight of the buck and could only see the does as they headed to the west. With work in a few hours, Cremer climbed down from his stand and looked for some sign of a hit, but couldn’t find a single drop of blood. He decided to back out, head to work, and return the next day to pick up the search.

Picking up where he left off, Cremer began his search. With nothing to go on, he stumbled upon the buck and was in awe of its sheer size and mass. The buck was much bigger than he had thought–with amazing character. It had 9 points on one side and 14 on the other. It’s bases measured 6 inches and it sported triple brow tines, a drop tine and palmation. Cremer’s Illinois giant unofficially scores 216 7/8 inches.

With trail cameras all over the property, Cremer wondered how this giant eluded the cameras. A neighbor, however, did have trail cam pictures of the deer. Sometimes simply being at the right place at the right time can lead you to a 200-inch whitetail.