During early bow season, Brenner Fahrenz and his brother were hunting on family owned property in Broome County, New York.... 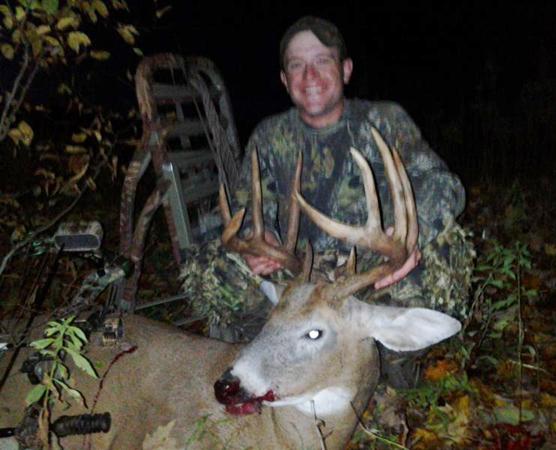 During early bow season, Brenner Fahrenz and his brother were hunting on family owned property in Broome County, New York. Scouting had revealed that the deer were feeding in hay fields and the Fahrenz brothers were going to try to cross paths with the deer on their way into the fields. Brenner went to one field and his brother was in another field across the road.

By 3:45 p.m. Brenner was settled in his stand. With a cold front moving in, he expected to see action early on. The afternoon didn’t go quite as planned and it wasn’t until 6:30 when he spotted the first deer of the evening. A group of four does entered the field and Fahrenz watched as three of the deer crossed the road into the field his brother was hunting.

The remaining doe looked back in the direction of Fahrenz from 120 yards away as if she had picked him out.

“How could this doe possibly see me?” he wondered. He was 10 yards off the field’s edge in a stand 25-feet up a tree and immersed in the canopy.

As the doe continued to stare in his direction, Brenner started to wonder if there was something else nearby that she was looking at. He slowly stood up and began looking around.

“I looked over a branch and saw a good-looking buck about 70 yards out on the field’s edge staring out toward the does,” said Fahrenz.

He Feared that the buck would follow the does off the property, but instead the buck turned and started feeding in his direction. “I grabbed my bow and started to mentally prepare myself. I closed my eyes and told myself not to look at the horns,” said Fahrenz.

Fahrenz slowly turned on his platform as the big buck continued to work his way in. The intensity grew.

“The deer is now at 40 yards, I draw, and he quarters to me. I hold. I’m surprised at how calm I am for this type of moment.”

With the buck quartering to him, Fahrenz was forced to let down. There would be another opportunity if the buck stayed on its course. As the buck entered the second shooting lane, Fahrenz came to full draw. At the same time the does that had headed across the road spooked and were running back toward him putting the big buck on high alert. With the buck at 30 yards it was now or never. Crouching to get under a limb, Fahrenz settled the pin behind the bucks shoulder and watched as the white fletching disappeared into his ribcage.

The deer jumped into the air and trotted off 20 yards before stopping. Then the buck toppled over just 25 yards from the base of his tree.

Brenner was a nervous wreck after the shot, hardly believing what had just happened. The buck was a mainframe 10-pointer with an 11th point forming a small crab claw on the left main beam. Fahrenz’s buck had a 15 ½-inch inside spread, an 18-inch outside spread, and weighed 200 pounds field dressed.