Larry Leggett always wanted to kill a buck on his birthday. This year, on Saturday, October 27, he got his... 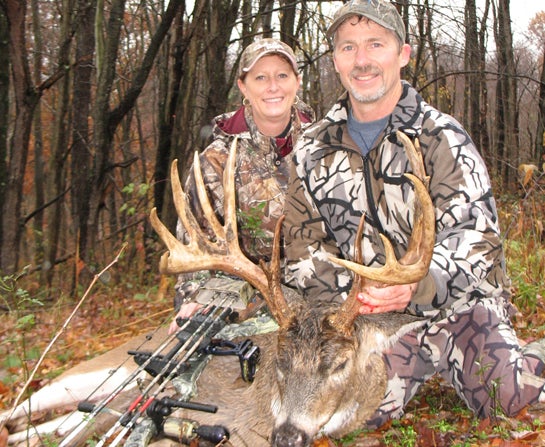 Larry Leggett always wanted to kill a buck on his birthday. This year, on Saturday, October 27, he got his chance. The season started off slowly for Leggett, who usually had four to six shooters on his trail cam by the end of October. With only one shooter buck caught on camera this year, Leggett didn’t like his odds.

Saturday was an ugly day, rainy and gloomy. Leggett decided to wait until the afternoon to hit the woods in hopes the weather would clear, but the rain kept coming.

It was about 3 p.m. when he got to his stand. Leggett waited several hours in the rain without seeing any good bucks. By 6:30 p.m., it was still raining and Leggett texted his wife who was hunting a stand nearby to see if she had anything going. Leggett was beginning to wonder what he was even doing in the woods. Just then, he glimpsed a shooter buck off to his left.

The buck stood at the edge of the woods, scanning a food plot. Leggett was able to see the buck’s split G2’s and knew it was one of two deer he’d seen on his game cams. As the buck moved closer, Leggett confirmed it was Stickers, a deer he captured on a trail camera the previous year. Leggett ranged the buck at 30 yards, but needed him to take just one more step for a clean shot.

Leggett drew back as the buck took the final step, but his arrow fell off the rest. Drawing a second time, Leggett now noticed a branch in the way and had to crouch down to settle the pin on the buck’s vitals. Leggett released and heard the unmistakable thwack of the arrow striking the buck’s chest. As the buck ran off, Leggett sat down to collect himself and replay the shot in his head.

Leggett waited 30 minutes before climbing down to look for the arrow. The arrow, however, was nowhere to be found. Leggett waited until dark to meet up with his wife and continue the search. It wasn’t long before the two found blood, but after the first 50 yards, the trail became spotty. It was time to put the search on hold and return the next morning. Before leaving the woods, Leggett and his wife backtracked along the blood trail to recover the arrow, which showed signs of a liver hit.

The next morning it was still raining. Leggett knew it was time for a grid-search strategy, as the rain would have washed away any blood. His wife, son, and nephew made up the search party, and they headed to a ridge where Leggett believed the buck might have died. But the search team came up empty handed. They regrouped and decided to follow an imaginary line from the last spot of blood to a bedding area the buck had used.

The buck traveled up a ridge and across an open hayfield before taking his final steps at the edge of his bedding area. After two and a half hours of searching, Leggett had his birthday buck in hand.

This was the buck of a lifetime for Leggett. Although he had seen bucks of this size on the farm over the years, this was the first that came within Leggett’s bow range. The giant deer had a split G2, stickers, and thirteen scorable points, giving him a gross score of 175 4/8″.