The next 10 days will likely bring some of your best hunting of the year. Last week we saw a... 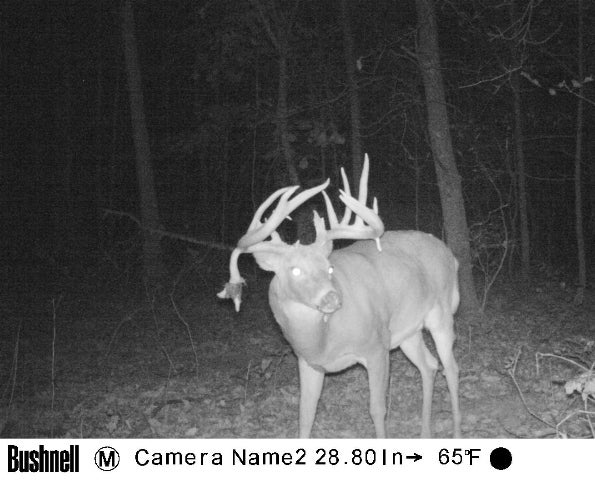 The next 10 days will likely bring some of your best hunting of the year. Last week we saw a marked change in buck behavior (on and off camera) and what we saw we liked. We are looking for some pretty good action after this storm passes, provided all our deer are not blown into Ohio.

We’ve received numerous reports of hunters getting shots and many more almost getting shots. Numerous chases have been reported but they still sound like testosterone-driven chases of short duration and no actual breeding. From the description provided, only one estrus chase was reported last week.

According to most breeding models, somewhere around 10-12% of the does will be in estrus this week or next. If one or more does on your property comes into estrus it will be Katie bar the door for a day or two. If not, it will still be business as usual.
Our sit sightings are actually down a bit from last week, but our buck count is up for sits and on camera. Many of the deer photographed were on the move, which means they were either getting out of the way in the case of does, or getting in the way in the case of a number of young bucks intent on being everywhere the girls were.

A few of the bucks we photographed were exhibiting testosterone-driven behavior–strutting their stuff, bowing their backs, and raising their hackles, in an attempt to be the biggest, baddest boy in class. The older-aged bucks were glaring at the lesser bucks, but mostly keeping track of the does. The intensity level of the bucks was definitely up this week. But most of our observations were still of feeding doe groups. Scrape activity is definitely up as is rub urination and stained tarsal glands.

We are close enough to prime time to make it worth your while to be in the woods as much as possible starting now. We expect prime time to hit the end of this week and through next week. Shortly we will be seeing a few days of peak buck activity, which we refer to as the hunter’s rut. It will be followed by a few weeks of lower activity, which we refer to as the biological rut. Buck activity will continue to build until most of them are busy breeding, which will be sometime just before the middle of November.

Unless you are certain your target bucks are out and about, you should still stay out of core bedding areas and give the more mature deer some breathing room. The leaf raking can wait, but we wouldn’t start calling in sick and taking your last 3 days of vacation for a week or so.

Our key rut markers on our home property are on a significant uptick. We’re now seeing older aged bucks, a reversal in buck to doe ratios (favoring bucks) sightings, and mature bucks out and about during shooting hours. These 3 factors combined point to the beginnings of the hunter’s rut. While buck intensity is up, and behavior is getting more and more rutty, prime time for us is still out there a bit. We, (like most of you in the Northeast) are looking for some good hunting to occur as the woods settle down from Hurricane Sandy.

For now, food is still a good hunting bet. Does are still on plots and they are beginning to get some attention. As this is being written, we are watching an 8-point, 2.5 yr. old chowing down on a clover plot with 4 or 5 does. He is not at all interested in them. This pattern will last for a bit longer until does will grow tired of the harassment on the plots and abandon them completely.

Does will likely get run off plots or common feeding areas over the weekend or early next week. Your best hunting areas will shift from food plots to staging areas and travel routes back in the woods. One of the biggest mistakes hunters make is staying on plots and feeding areas long after the does have been harassed away from them. Next week, funnels should be great hunting locations.

Guys are getting some good results with grunt calls, but we haven’t heard about too much success with rattling yet. Don’t call too much, though. Like calling ducks, too much calling at walking bucks can make them call shy. And, if you don’t know how to use one, sometimes they are best left in the pack.

As far as weather goes, about the only thing that will slow down activity will be temperatures 10 degrees over normal daytime highs. Bucks with love on their minds will be doing their thing in wind, snow, sleet, and rain. No fun to hunt but a shot is a shot. The aftermath of the big storm should bring some great sits in the woods.

On the personal side, our prize “Shooter 10” returned and gave us a nice look on camera. He was showing plenty of interest in does but he is still a night owl at least on our place. He’s been a tough one to pattern since we started seeing him in September. We found out why. Last week we photographed him all over our 500 acres; unfortunately so have the neighbors. Seems he’s a ranger and likes to travel. He’s been going for walkabouts (which explains his periodic disappearances from our cameras) and ranging out a couple of miles at a time. Rangers don’t last long in our neck of the woods and unless he changes his ways (which he probably won’t) or falls in love with a few of our does, he will probably be dead in a few weeks (and not by us). We just might intercept him on a ridge or catch him working some of our resident does but right now it will be a low percentage random hunt.