As predicted, last week was an excellent hunting week for hunters across our network. The pics started rolling in the... 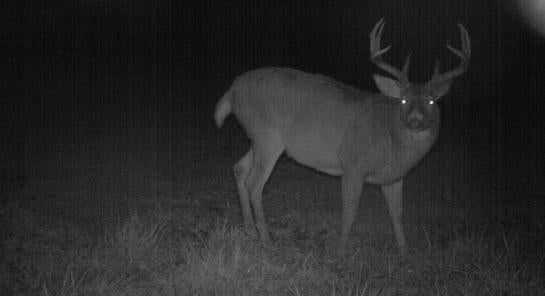 As predicted, last week was an excellent hunting week for hunters across our network. The pics started rolling in the day after Hurricane Sandy slowed up and have yet to stop. The bucks are out and about and showing up everywhere. We predicted 10 days of action so if you are going to hunt any weekend this season it should be this one.

We are clearly in the hunter’s rut as you read this. Characterized by a significant uptick in buck activity, the markers we look for to indicate that the hunter’s rut is on are a change in buck-to-doe ratios (favoring bucks) on camera and during sits; older bucks pursuing does; older bucks making themselves evident during daylight hours; deer with mouths open (heavy breathing) on camera and an increase in new bucks (uniques). These are pretty much our money markers and when taken collectively never lie.

We did observe what may be the beginnings of does being harassed off of feeding plots by bucks. Last night Neil observed more than 20 deer on one feeding field and most of them were young bucks and fawns without momma. We will be watching this closely as it signals breeding activity and a decrease in buck sightings. We expect the bulk of the breeding to occur within the next 2 weeks.

Our sits the first part of last week were highly productive from the standpoint of deer sightings. We averaged 5.6 deer per hour sighted from stands. We worked food plots and more deer per hour than anytime during the season. A few of these sits were weather driven which typically results in heavy plot use. We passed on many shots on does and have pretty much decided to leave the does as bait until sometime during the gun season until we can do an efficient harvest and not spend a lot time during prime time tracking and dragging and disrupting the mature bucks that are now up and about.

During the second half of last week, we pulled back from plot hunting and started targeting known big-buck travel routes on ridges and travel corridors. As expected, it cut down the number of sightings but put us in a better position to intercept a good buck. Last week almost 50% of all deer sighted (not counting fawns) were bucks. Prior to last week for some reason, buck sightings were around 10% of all deer sighted which had been pretty alarming. Earlier this week I almost got the chance I was looking for with a beautiful mature buck which was working a 100 yards downwind from a food plot full of does. Our mature bucks typically check plots from afar and this guy was no exception. Unfortunately dark came before the buck made it to me. I had a good story but that’s about all.

Speaking of stories, we were reviewing last week’s pics last Sunday when Neil let out a hoot. The nice 10 point he has been trying to figure out since the beginning of October was on camera. The hoot came because he was breeding a doe right there in living color for all the word to see. Neil has probably looked at a half million pics over the years and this is his first actual shot of a buck breeding a doe. The breeding occurred November 1 at 4 in the afternoon, a sure sign that this boy was out and about during daylight hours and definitely huntable. It was time!

The next evening Neil set up in an area where we had photographed the buck a number of times, but had intentionally avoided. He had been saving this location until conditions were perfect. He watched a number of young buck and doe/fawn groups and some soft rut-related behavior but Mr. Big was nowhere to be found.

Figuring the area had one more sit in it, he returned the next night. This time Mr. Big showed and Neil took him at 31 yards–a happy ending to a story that had been in the making for over a month. Timing is everything. This old boy (5.5) was plenty smart but vulnerable. We don’t call this time of year the hunter’s rut for nothing. See the full story behind that hunt here.

As the rut progresses more and more does will be breeding or will have been bred. We are probably about at the 25% rate about now. In a week or so this number will climb rapidly and buck activity will actually slow down for a few weeks while most of the breeding occurs (biological rut). Tarsal staining gets darker every day. That’s why now is when you want to be out there while they are still doing more looking than breeding. These ruts are discussed in my Outdoor Life November article which is on the newsstands now and is discussed in depth in our new book Whitetails: From Ground to Gun (available soon).

Right now about 70% of our reporters are reporting high buck activity. Some properties are yet to see much in the way of rut activity. If you are one of them, hang tight because it will kick in any minute. You had best be ready.

How To Play It
This week’s hunting strategy will be to get out there and hunt. Hunting the hunter’s rut has a certain randomness to it. A chase can break out any time or any place. Try to set up in known doe areas and put in some serious time.

Evenings are still good but mornings now become very good as well. Mid-day is also an excellent time to be in a stand. If your deer respond to rattling, now is the time to give it a try and grunting is highly productive as well. Hunting all day is a good play now and changing locations 2 or 3 times per day can yield good results as some buck doe chases go on for hours without ever leaving a 5 acre area.

We favor ridges and funnels where bucks are likely to travel from one place to another. In a week or so, scrapes will go cold for the rest of the rut so we wouldn’t spend much time hunting them unless they are in a high traffic buck travel areas.

You can get away with more mistakes during the hunter’s rut than any other time of year. Bucks are walking around in a fog and doing stuff they normally wouldn’t. This week we have seen multiple bucks standing in the wide open and staring at us from 30 yards away. A friend took a nice 3.5 year old, 10 point yesterday–after missing him on the first shot.

Bottom line, call in sick, take vacation, and cut class. This week should be good. The only thing that can slow things down are temps 15 degrees warmer than normal. That will force action into the cooler evenings.

About the Author: Craig and Neil Dougherty run NorthCountry Whitetails, a deer hunting and managment consulting business, out of upstate New York. They have two highly-managed properties that they monitor all year long. Throughout the season, they take hundreds of thousands of trail camera photos and log data on each of their hunts. They are also in contact with hunters across the country who relay deer activity information.