A few weeks ago we predicted 10 days of great hunting as the hunter’s rut was beginning to kick in.... 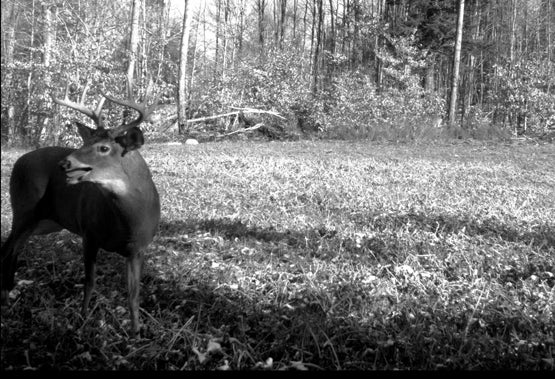 A few weeks ago we predicted 10 days of great hunting as the hunter’s rut was beginning to kick in. The action really picked up after the east coast hurricane subsided and the cold weather settled in. Kill reports have been streaming in from across most of whitetail country.

Based on reports from the field and our own observations we are in the throes of the biological rut. The deer are breeding and having a grand old time of it. And, while there is plenty of activity associated with the breeding there is not always a whole lot of movement.

Our cameras recorded waves of action all last week. We caught many does running wildly with gape-mouthed bucks hot on their trail scattering family groups and fawns along the way. The action ran hot and cold and seemed to happen just about any time of day–it was almost random by nature.

By the end of the month, 95% of the mature does in whitetail country will have been bred. The older bucks are taking control of the breeding and staying tight to estrus does. They will be walking about between breeding sessions, but mature buck activity will not be at the same level as it was 2 weeks ago during the hunter’s rut. Many refer to this phenomenon as being locked down with does.

Evidence of the biological rut is a marked decrease in food plot usage by does, fewer sightings of mature bucks, fawns grouped up in strange places with no doe present, does very much on edge and bucks and does paired up or multiple bucks hanging around a specific doe that is obviously in or approaching estrus. During the biological rut, you will see all kinds of rut related behavior by bucks including chasing, rubbing, tending and even some feeding and resting. You will also see plenty of nothing when it comes to big bucks. The biological rut can produce some pretty quiet sits.

For most of the past weekend I watched 2 fawns hanging out in my cabin dooryard. These fawns were stashed there as newborns last spring and now have returned to this safe place to wait out mom’s fling. A button buck showed up yesterday and almost wandered through the back door. His momma is unquestionably tied up with a buck somewhere nearby and until they reunite in a few days he is indeed a lost soul.

The most obvious indicator of the biological rut in progress is observing breeding (or close to breeding) behavior. Last week’s report noted that we actually caught a breeding event on camera and we have included it here as proof positive of the event.

My son Neil and I watched a beautiful dominant buck tending a doe on Neil’s farm last Saturday. The doe stayed on the plot quietly feeding for well over an hour under his watchful eye. He fed with her, shredded some brush, chased off a few rival bucks and kept all the deer in the area (including her fawn) away from her. He even bedded for a 15-minute rest. He grunted but never crowded her, instinctively knowing that within 24 hours she would stand for him.

This is what mature bucks generally do during the biological rut. But what they don’t do is the important part–he didn’t change his location. Didn’t move more than 60 yards and didn’t pass by any hunter’s stands for the entire evening. As a matter of fact, Neil has four cameras located within 200 yards of where the scene played out but not one of the cameras picked up movements of the buck and doe. A week earlier he would have been all over the property looking for breed-able does. This is what separates the high-activity period of the hunter’s rut from the spotty activity of the biological rut.

We are regularly receiving reports from the property we refer to as “The Laboratory where eight separate breeding parties are in progress on its 200-acre expanse of CRP land. Each doe is being tended by from 1 to 4 bucks. Some come and go, but most stay with her. Roughly 20 bucks are being tied up by 8 does for hours if not days at a time. This is typical biological rut behavior. Contrast this with the hunter’s rut where the does will be avoiding the bucks and all 20-something bucks would be prowling about looking for a receptive doe. Which time would you be most likely to get a buck in front of your treestand?

If you get in the middle of a breeding party the action can be fast and furious. On the other hand, if the action is occurring 200 yards away you may not see a deer all day. It can get pretty discouraging and worst of all is pretty hard to predict. It can be a random hunt but you need to be there.

Changing locations every few hours is a good bet during breeding as is hunting does in order to find bucks. Mature bucks still move from doe to doe so that argues for stand locations on travel routes and near where does are likely to be hunkered down hiding from bucks.

The key to hunting the rut is to put in your time and be there when he is. It is often a matter of rolling the dice. Many hunters get discouraged after a few slow days and think that the rut is over. But the rut isn’t over until all the mature does (and fawns large enough to breed) are bred and that will be sometime in December. We don’t expect you to hang tough until then but you need to keep at it at least through the peak of breeding season (next few weeks).

Hunting favorable weather conditions (cold snaps and changing weather conditions) can pay off and some hunters do well with grunting rattling and doing some doe bleating. All can work on lonely bucks on the lookout for a friendly doe and nothing (except maybe a stalk) will work on a buck who has found a girlfriend. Basically, the key to taking a buck during the biological rut is having the staying power to stay after them and stay positive.

(See the trail camera photos that illustrate the deer behavior mention in this post from the dougherty’s and their contacts across the country).

Let me know what’s going on in your deer woods. I’ll try to include it in my report next week. E-mail me at: CDough1103@aol.com

About the Author: Craig and Neil Dougherty run NorthCountry Whitetails, a deer hunting and managment consulting business, out of upstate New York. They have two highly-managed properties that they monitor all year long. Throughout the season, they take hundreds of thousands of trail camera photos and log data on each of their hunts. They are also in contact with hunters across the country who relay deer activity information.0