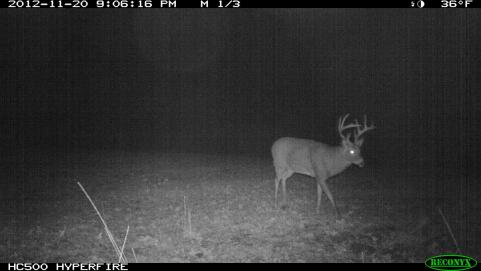 The biological rut is winding down in most places and over in some. By now, 90 to 95% of the adult does in whitetail country have been bred and things are getting back to normal. As the rut winds down some great whitetail hunting lies ahead. Big bucks will be back on the feed and hungry bucks are very huntable.

Even though breeding activity is diminishing, there will be another short flurry of rutting behavior in about a week as a small number of mature does recycle and a relatively small number of doe fawns come into their first estrus. That will create some additional activity, but is hardly a full-blown second rut as many would like to believe.

We are seeing most of our doe/fawn groups reuniting and are not seeing lost fawns (unless momma has been harvested) wandering about as they were just a couple of weeks ago. Meanwhile, young bucks are still acting stupid, pushing and shoving, following does and generally acting like young bucks in lust. Older-aged bucks have become a bit scarce in light of the firearms season. Intense hunting pressure combined with fewer hot does has made our whitetails super cautious. If we keep the pressure off, they should begin to relax in a week or so and begin to offer some terrific food- driven hunting. Right now there is a great deal of night feeding going on.

This is often a very quiet period in the hunting cycle especially in high-pressure hunting areas. All adult deer are extremely cautious and reluctant to visit areas that have been hunted with any degree of frequency. High-pressure areas are devoid of deer and they are doing what they can to avoid humans. Their tolerance for humans has decreased and they are now spooking at the hint of a human.

This is the time of the cycle that clearly separates the serious mature deer hunters from the wannabes. Sits can still be productive but you need to be hunting where the deer are and that is not necessarily where they were two weeks ago. Many are holed up in out of the way places. You need to find them and you need to put in some time to be successful.

In low-pressure areas, most whitetails are returning to food- driven behavior patterns. Does and fawns are once again feeding heavily while bucks are catching a few bites here and there. Our camera numbers on feeding areas are steadily climbing and we are recording more midday photos than earlier in the season. We are also seeing more night activity by mature bucks.

Nasty weather will bring them out to feed and colder-than- normal temperatures will result in increased movement until it gets so cold that they don’t move at all. Before long extremely cold temperatures will make midday feeding attractive to deer in low pressure areas as they take advantage of moving during the warmest part of the day. Hunting strategies for late-season bucks pay huge dividends here. This is a good time to hunt areas that have not been hunted all season. These pollution-free zones are well known to mature bucks and you can often catch them hanging out in these areas.

If your bucks have been heavily hunted, go easy on the calling and rattling. They probably have heard plenty of grunt calls by now, and like a call-shy mallard, will head the other way when they hear the call.

Remember that food will become increasingly important as the season progresses. You will need to put in your time. Good bucks are still out and about doing their thing. The need to breed never really leaves them and there are still some second cycle estrus does and first-time fawns out there to keep them active. This is also a great time to fill your freezer with hungry does.

See trail camera photos of the deer activity mentioned in this post from Craig’s property and his contacts across the country.

About the Author: Craig and Neil Dougherty run NorthCountry Whitetails, a deer hunting and managment consulting business, out of upstate New York. They have two highly-managed properties that they monitor all year long. Throughout the season, they take hundreds of thousands of trail camera photos and log data on each of their hunts. They are also in contact with hunters across the country who relay deer activity information.