The 2012 Wisconsin hunting season was three years in the making for Kurtis Hulett. Countless hours were spent searching for... 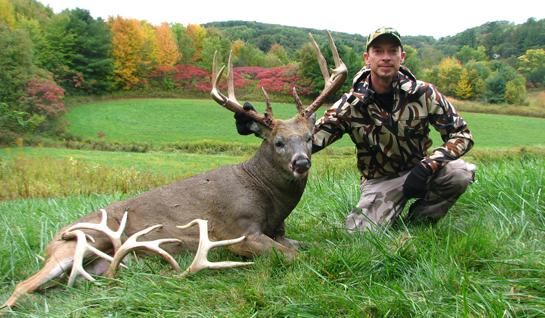 The 2012 Wisconsin hunting season was three years in the making for Kurtis Hulett. Countless hours were spent searching for shed antlers, identifying bedding areas and looking for large tracks.

“This past spring I was specifically targeting this particular buck’s sheds and wanted to learn as much about him as I could,” said Hulett.

All that time spent scouting was about to pay off for Hulett. It didn’t take long for him to locate his target buck that summer and then re-locate him once he switched to his fall pattern.

Hulett spent the opening evening in an observation stand and watched as the buck stepped into an alfalfa field just before dark. The next day Hulett moved to within range of the trail the buck was using to enter the field and hopes were high. The buck, however, never showed up. Hulett spent the next three nights trying to relocate the buck, but came up empty handed.

It was getting frustrating, but with a favorable moon and a cold front moving in, things were about to change. On September 21, Hulett was perched in his hang-on stand watching the woods below.

“I banked on the fact that this buck had to be using the same bedding area that he used the previous fall,” he said. “It’s a spot that is tucked back in the farm and I can’t scout it from a long distance. I climbed into a stand that I hung during the spring specifically to kill this buck.”

Three hours before last light, deer started moving through the area. Six bucks and several does made their way down the ridge and walked past Hulett’s stand. As he watched the deer on their way to a nearby alfalfa field a loud ‘snap’ of a branch caught his attention. A buck was moving through the brush and headed straight for him.

As the buck moved in, Hulett came to full draw, but was unable to get the pin on the buck’s vitals. Slowly, he let down. For the next several minutes Hulett painstakingly watched as the buck slowly closed the distance. At 13 yards Hulett finally had his chance and came to full draw again. The arrow slipped its way through the shooting lane and the buck’s vitals. The buck barreled off and Hulett couldn’t help but think, “go down, go down…he’s down!”

When Hulett grabbed the antlers for the first time it was bittersweet. In front of him was a deer he had watched grow over the years, but the journey had come to an end.

“It felt great to put my hands on him. I had done my homework, hunted smart, and ended up giving him a quick clean death. You can’t ask for much more than that,” he said.

The buck had plenty of antler to be proud of with a gross score of 155 4/8 inches, but it was the history between Hulett and this buck that really made for a memorable hunt. He had passed the buck during the 2010 season when the buck was a 3 ½ year old. In 2011, Hulett’s dog found the matching pair of sheds from the buck and another set of matched sheds was found this spring.

“I love the pursuit and trying to figure out one particular deer, I had made up my mind that I would either kill this buck or eat my tag trying and to have it all come together gives me a feeling that’s hard to put into words,” says Hulett.