The summer months in South Dakota dragged on slowly while Calvin Gellatly prepared for archery season with weekly shooting sessions.... 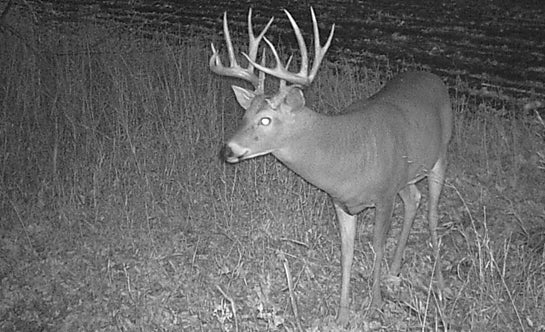 The summer months in South Dakota dragged on slowly while Calvin Gellatly prepared for archery season with weekly shooting sessions. Although he’s been hunting the same piece of land for 20 years, the property is owned by a group of hunters and this year there would be added pressure during the archery season.

By the time August rolled around, he was in the woods hanging stands in new areas and tweaking existing stand locations to deal with changing deer patterns. Gellatly prefers to single out a buck and go after that particular deer and this year was no different. His trail camera captured pictures of a particular buck in one location of the property, but almost all of the photos were after shooting hours. Gellatly would have to pinpoint where the buck was coming from or going to during shooting hours if he were to get a chance.

Of course, as luck would have it, during the week of Halloween there was one night when Gellatly didn’t hunt and it was the same night the buck made an appearance during shooting hours.

By 3:15 p.m. on November 5, Gellatly was settled in his stand and ready to hunt his target buck. With the deer expected to come from the east or northeast, the southerly wind would provide a limited amount of time to put a pin on the deer before they crossed paths with his scent trail. With time running out and hunting pressure increasing on the property it was a risk he had to take.

It was just before 4 p.m. when Gellatly heard what he thought was a squirrel. The sound was coming from the West and when he turned to look for the source, he was dumbfounded to see his target buck making his way in.

“I knew immediately which deer it was, but I was also in somewhat of a panic mode because the trail he was heading toward had limited shot opportunities,” said Gellatly. “It was also going to quickly lead him straight downwind of me.”

With the buck 25 yards away and about to cross his scent trail, Gellatly put the sight pin behind the buck’s shoulder and heard a strange sound as he released the arrow. His bottom bow limb had come in contact with a branch and the arrow hit too far back. The buck slowly walked off and bedded within 70 yards of the stand.

“I waited a while in stand before getting down and slowly backed out, but he got up just as I was leaving and moved slowly on,” said Gellatly. “My heard sank a little bit, but I was confident he would expire quickly.”

Gellatly made the mile long walk back to the truck to drop off his gear and take off a few layers before heading back to search for the buck–a regrettable decision as he bumped the buck for a second time. It was time to back out and return in the morning.

It was a sleepless night with temperatures in the low 30s. Thankfully, the buck would not make it too far. Gellatly found his buck not far from where he had last spotted the deer the night before. Realizing that after 70 hours on stand, the chase was over, the feeling was bittersweet. It was Calvin Gellatly’s largest buck to date–a mainframe 10-pointer with split G2s.

“I’m thankful at this time that I have a job that enables me to put the hours into archery hunting that I do,” says Gellatly. “Luck always has its role, but so often archery hunting is about timeand being prepared for the shot if/when it does finally present itself.”