For the last 18 years, Nick Chadick has been hunting the same area in New Castle County, Delaware jumping between... 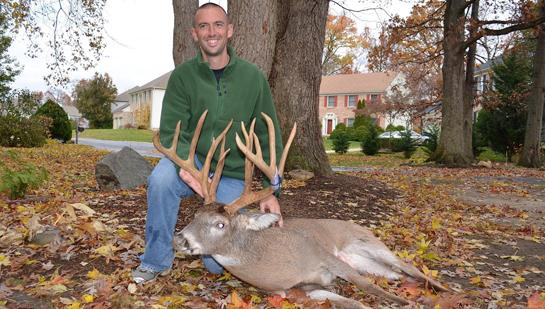 For the last 18 years, Nick Chadick has been hunting the same area in New Castle County, Delaware jumping between public land and private land. Hunting public land is a bit more challenging because stand location is determined through a daily lottery during shotgun season and first-come-first-serve basis during the archery season.

The wind led Chadick to hunt public ground on November 13th. Shotgun season was in full swing and Chadick had to stick to stands put out by the State. Chadick chose a stand placed in a pinch point between a series of fields and a large creek.

It was a cold and rainy morning with a southwest wind rolling over Chadick’s shoulder toward the creek. It was an almost perfect wind. Just after daybreak, a doe and fawn made their way down a familiar trail, one that Chadick had watched several deer use during the archery season. With the way things were going this season, Chadick was tempted to take the doe, but he knew that would kill his chances of taking a buck.

A minute or two later, Chadick saw another deer on the same trail the doe and fawn had just come down. Immediately, Chadick knew this was a shooter buck because his giant brow tines stood out. The buck grunted with every step he took and kept his nose to the ground like a bird dog.

When the buck reached an opening 50 yards from his stand, Chadick let out a grunt to stop the buck, but the buck had other things on his mind. Moving his shotgun to the next opening Chadick yelled, “YO!” and that got the deer’s attention. With the crosshairs on the buck’s shoulder, Chadick fired and watched as the buck spun and ran. The buck ran 20 yards and then crashed.

“He dropped so fast I didn’t have time to react,” says Chadick. “It seemed like by the time I pulled my head off the stock, he was already down. I can clearly remember seeing white belly and I lost it.”

Chadick knew he had a big one on the ground, but there was a small thicket covering the buck’s rack and he wasn’t able to see how big this deer really was.

Being on state land, Chadick was required to stay on stand until 9:00 a.m. – it would be a long two-hour sit watching over his dead buck.

“When I first walked up on him, I froze about 20 feet from him and just stared,” said Chadick. “I was completely shocked. Seeing the backside of his rack just floored me. Putting my hands on him just didn’t seem real. And never really seemed real even a day later. I did a lot of staring and taking pictures before field dressing him. I was apprehensive to even move him let alone cut him open.”