With the biological rut all but wrapped up, our buck sightings across whitetail country have dwindled dramatically. All the bucks... 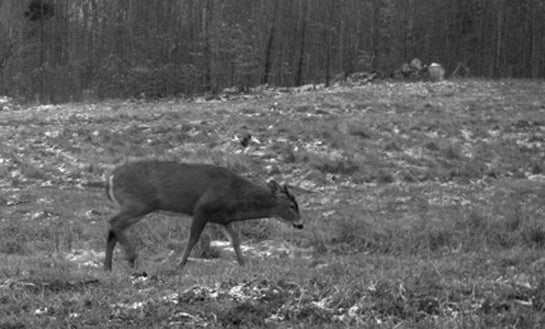 With the biological rut all but wrapped up, our buck sightings across whitetail country have dwindled dramatically. All the bucks haven’t been killed, but they are really feeling the pressure and making themselves scarce. Your best bets for killing a good buck now are taking advantage of severe weather conditions (providing you have them) and staking out high carbohydrate food sources like standing corn and unharvested bean fields. The post rut, need to feed is in full swing and mature bucks are repairing their rut-exhausted bodies by heading to food sources.

Unfortunately a good chunk of whitetail country has been too warm for the past few weeks which has made the need to feed less critical. There is something about cold nasty weather which gets big bucks up and about during the post rut period. Temperatures 10 degrees below normal or more will get deer up and moving. Mild weather discourages deer from moving about and feeding aggressively. Many believe it is their heavy winter coats. Throw in an overlay of extreme hunting pressure and you have a formula for the multiple no-deer-sighted reports we have been getting. They are lying up during the day and have no reason to move very far.

Our doe/fawn sightings are holding up well on evening green plots, but these deer are bedding within 100 yards of the plots and moving very little from food to bed. The bucks are hanging back altogether in areas where they have been pressured.

Neil’s farm has seen very little pressure and he is seeing plenty of bucks, which seem to be reforming into bachelor bands. He watches them and doe groups most days from his office window and it’s as if they know they are in a safety zone a few hundred yards from his backyard. He has the best food and cover in the neighborhood and with very little hunting pressure, is seeing plenty of action (through his office window). Were he to go out back and shoot a few it would all change overnight.

With the warm weather, Neil’s farm deer are opting for green clover rather than to standing corn. Normally deer will eat frozen greens, but given a late-season choice between frozen greens and corn, corn will win hands down. Throw the weather switch for a week and it will be all about corn and bean pods.

Our cameras are down to record lows in terms of photo volume. Where we once had hundreds if not thousands of pics each week from each of a dozen cameras, we now are down to a few dozen.

With a week left in the NY season and no severe weather in the forecast we are now resigned to finishing out our doe harvest. We are not optimistic of taking a good buck with more warm weather on the way.

As far as hunting strategies go, if you are in winter weather, stake out high carbohydrate food sources and hunt the food. You guys out there in the Midwest who are getting snowed on and blowed on need to take advantage of the foul weather and a deer’s need to feed and stake out your food sources. A few hours before a winter storm is a good bet as is the day after a storm. Remember the magic temperature is 10 degrees below normal and high-carb foods like corn and beans are the ticket.

As far as hunting in mild weather, food plots are still producing but mostly during the last hour of daylight.

Stillhunting can also be a pretty good tactic if you know how to avoid running deer off your property. Wet leaves are a must and windy stormy days are generally the best days to sneak a deer. Bottom line, it’s real tough to sneak on a mature buck that has been hunted for a few seasons unless you know where he beds. Tread gently and tread lightly.

Two man pushes can get deer on their feet, too. Big-gang drives are popular in some areas for late-season hunting, but tend to scatter deer all over the country and get a lot of deer shot that shouldn’t be.

If you are in late-rut country of the south, get out there and put in the time. They will come to you if you are able to log some hours in the stand. If the rut is in full swing or just about to break, get out the rattling horns and break out the grunt calls and give them a whirl. If you are in a high-pressure area use caution.

See trail camera photos of the deer activity mentioned in this post from Craig’s property and his contacts across the country.
_
About the Author: Craig and Neil Dougherty run NorthCountry Whitetails, a deer hunting and managment consulting business, out of upstate New York. They have two highly-managed properties that they monitor all year long. Throughout the season, they take hundreds of thousands of trail camera photos and log data on each of their hunts. They are also in contact with hunters across the country who relay deer activity_ information.