The rut may be winding down, but there is some great hunting ahead if you are lucky enough to live... 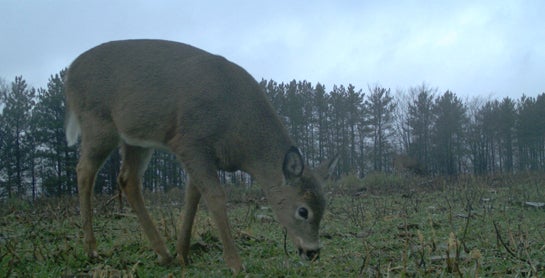 The rut may be winding down, but there is some great hunting ahead if you are lucky enough to live in a state with seasons that extend well into December. This is one of our favorite times to hunt as mature bucks gradually shift from the need to breed to the need to feed. And, that’s just about where we are now.

The biological rut is just about over, but there will definitely be some second-time-around mature doe and first-time fawn breeding this month. It will be, however, sporadic and not dominate overall herd behavior. Some refer to this period as the second rut, but is more of a breeding blip and pales in comparison to the rut of a month earlier. Right now, a doe in heat will draw a crowd, but estrous does are few and far between unless you are in an area in which the buck to doe ratio mandates two cycles to get all the does bred. If you do, get out there and get after them.

This week’s sits were very productive from a head count perspective. We are back hunting green plots and each sit resulted in at least a dozen sightings. Trouble is, almost all of the sightings were of doe and fawn groups. Our buck sightings were few and far between. Most of our vigils were evening sits and most of the deer came to the plots within the last hour to half-hour of shooting light. They poured into the plots anticipating the safety of the cover of darkness. We did some midday hunting and saw some decent activity from 10 to 2 but the bulk of the activity was just before dark. We are averaging somewhere 6 to 8 deer observed per hour.

Our camera activity was way off this past week. Not much moving around except for coming to food sources in the evening. This is undoubtedly due to the biological rut winding down and the effects of over two months of hunting pressure. Most of our bucks are back to nocturnal behavior and will not start moving during daylight until hunting pressure slacks off or harsh and cold weather drives them to move during the warmth of daylight hours. Bucks rebuilding their bodies aren’t big on burning life saving calories by moving about during the cold of night.

Neil watched a nice 3-year-old buck last week in a large CRP and food plot complex. The buck bedded near him and stayed put most of the day. Neil spotted him at dawn and was able to track him all day. He got up at 9 a.m. and fed in the goldenrod field for 45 minutes. He covered all of 40 or 50 yards before returning to his bed. He was up again at noon and fed again for 30 minutes. He bedded 30 yards from where he started feeding. Multiple doe groups were quietly moving about in the weeds within a 100 yards of him and he showed no interest at all. As darkness began to gather he walked about 100 yards to a food plot and fed along the edge for 15 minutes before lying down again. His rear end never left the edge cover of the plot. He wasn’t about to expose himself by trotting out into the open–all this caution on a 1,000-acre hunting property with very little pressure. Anyone wonder what all the older age bucks are doing?

This buck would have snapped into action like a frog on a June bug if he even got a whiff of estrus doe but no whiff was to be had that day in the weeds. He had no desire to walk or trot or cover ground in any manner looking for does as he had been doing a month earlier. For him it was time to rest, repair, and recover. Deer experts often refer to this time period in the rut cycle as the recovery stage.

On the plus side, a very nice shooter showed up last week for a photo op. We hadn’t seen him since last year when we photographed him repeatedly. He wasn’t sporting much in the antler department last year so we gave him a pass. This year, we hadn’t seen him at all and wrote him off as gone. But he swung through last week (after dark) to check out his old stomping grounds. Last year’s winter had treated him well and this year he is a first-class shooter. After seeing the trail cam photo, we set up on the area once or twice without a look. Our working theory is that he moved out of last year’s territory to make room for the buck Neil killed earlier in the season. It is a doe-rich area and we keep it quiet. With the void created by Neil’s success, he came back to his old stomping grounds to hang with the does, eat at our table and avoid all the neighborhood hunting pressure. Severe weather will be our ally, but with none in the forecast we can only back off, and give him some room to set up shop in his old territory. We’ll keep you posted. We’ve put him at 7 or 8 years old.

We are, however, actively filling freezers as we write this. The mild weather makes for comfortable sits and the does are back on the feed. The only trick here is trying to take them away from the core areas, which are home to our shooter bucks. One shot kills and low impact recoveries are the name of the game in the doe harvest business. The last thing you need is a 1,000-yard blood trail. This time of year it is always a trade off between taking does and waiting out the old fellows.

There is more good news even though the rut is wrapping up in most places. It is ramping up in Mississippi, Alabama and in some areas in the South. Although researchers don’t fully understand why the rut in certain areas is out of sync with the rest of whitetail country, fawn survival makes the most sense. All we can say is never look a gift horse in the mouth, and get out there.

See trail camera photos of the deer activity mentioned in this post from Craig’s property and his contacts across the country.
_
About the Author: Craig and Neil Dougherty run NorthCountry Whitetails, a deer hunting and managment consulting business, out of upstate New York. They have two highly-managed properties that they monitor all year long. Throughout the season, they take hundreds of thousands of trail camera photos and log data on each of their hunts. They are also in contact with hunters across the country who relay deer activity information._