Dusty Gerrits almost didn’t go public with this buck he shot last November. But after the green score topped the... 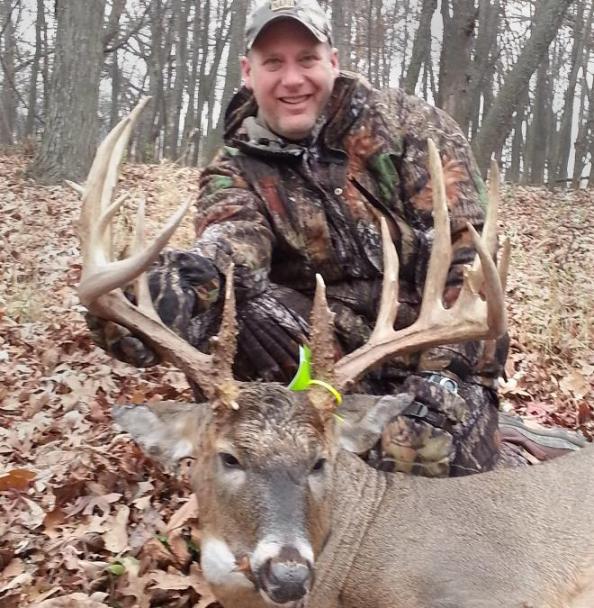 Dusty Gerrits almost didn’t go public with this buck he shot last November. But after the green score topped the state archery record, he decided to contact official scorers and have the rack measured. Sixty days later, the news is official: The Gerrits Buck is the biggest deer to be taken by a Badger State bowhunter.

Gerrits shot the buck on election day morning while hunting a property near Waupun in Fond du Lac County. There was already a small 8 pointer beneath his stand when the big buck came in. This from the Milwaukee Journal Sentinel:

_”A few minutes before 7 a.m. Gerrits noticed a high and wide set of antlers moving through dense brush.

‘I knew it was big, so I just wanted to concentrate on being still and focusing on the deer,’ Gerrits said.

It’s hard enough to draw a bow without being detected by a lone deer. With two bucks within 20 yards of his stand, Gerrits knew the challenge was even greater.

After once drawing and having to let down for lack of a good shooting opportunity, Gerrits was relieved to see the bucks circle back to the scrape.

Once again, Gerrits drew his bow. This time the bigger buck stood broadside at 22 yards. Gerrits released his arrow.”
_
He hit the buck and watched as it whirled and ran. He heard a crash, then silence. He waited for 45 minutes and then began searching for a blood trail. He found the massive buck only 50 yards from where he shot it.

The buck Gerrits nicknamed ‘Big Surprise’ had 12 scoreable points, an inside spread of 20 2/8 inches, and its longest tine measured more than a foot.

Its net score went 189 3/8 inches beating the Inda Buck by more than an inch.

Fond du Lac County is now home to the top Wisconsin archery bucks in typical and non-typical categories. The 30-point buck taken by Wayne Schumacher in 2009, holds the non-typical record – it scored 243 6/8 inches, according to the Sentinel.