Luke Muldoon’s buck story begins in 2008. That’s when the Maryland hunter began seeing a 1 ½-year-old buck in his... 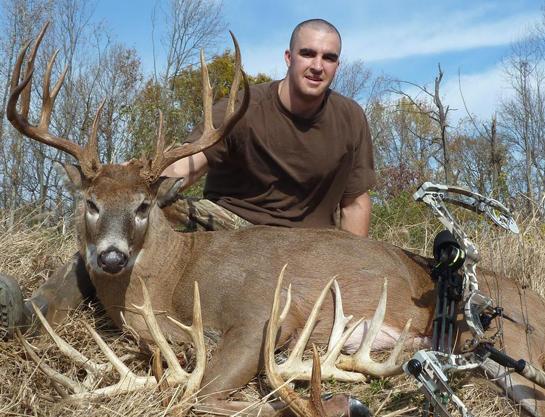 Luke Muldoon’s buck story begins in 2008. That’s when the Maryland hunter began seeing a 1 ½-year-old buck in his hunting area that was easily distinguishable by the white circles around his unusually large and swollen eyes. The buck would drift between some overgrown fields and timbered areas on one of the properties he hunted and over the next four years, Muldoon would become quite familiar with this buck.

During the 2010 season, the buck continued to follow his old habits, but daytime sightings had dropped off significantly. The buck was very impressive, now sporting a 160-inch, 10-point frame. The buck had developed a reclusive personality, but Muldoon had learned the patterns and habits of the buck by observing him over the last two years.

That spring, Luke was determined to find the sheds from the big 10-pointer, but never found them during the spring of 2011. The buck was now 4 ½-years old and sported 170-inches of antler with some interesting character. By this time, the buck was the largest antlered and largest bodied buck on the property. His avoidance of human intrusion and trail cameras became more and more apparent. One thing Muldoon noticed was that the buck frequently bedded on top of a small ridge overlooking all possible entrance routes and had several escape routes. As hard as it would be, Muldoon made up his mind to leave the buck alone that fall to see what he would look like as a 5 ½-year-old deer.

After the hunting season, Muldoon found the buck feeding in reforestation areas and in overgrown fields. “I carefully observed the buck from a distance until his antlers were shed, at which point I moved in and found his set on the same ridge that his right side was found on a year prior,” said Muldoon. Additionally, he was able to find the buck’s left antler from 2010 to match his right side he had found the year before.

That spring Muldoon was back in observation mode and watched as the buck began growing his new set of antlers. It didn’t take long to notice some abnormalities with the rack as the buck began growing some non-typical points on both bases and a long backscratcher behind his left base that branched in several directions. The buck developed a 9-point frame instead of a 10-point frame like the year.

During the early season Muldoon hunted hard, but never encountered the deer. Continuing to run trail cameras, he was finally able to locate the buck in an old timbered thicket in early October. Luckily, Muldoon had all the information he needed to confirm the buck was still living on the property.

On November 11, he went out to move cameras in the early afternoon. While walking up to a camera, he looked up and saw a doe, with the buck standing patiently behind her. Muldoon quickly turned away as the buck and doe snuck back into the thicket. “At that point, I had no doubt where I would be hunting the next morning,” said Muldoon.

The morning of November 12 brought an east wind and warm weather. “I knew I couldn’t hunt the upwind side of the thicket, so I decided to make a quiet entrance after first light in order to find a tree and get set-up with little disturbance to my surroundings,” said Muldoon.

Within 20 minutes of being on stand, Muldoon had two does wander by, followed shortly after by a lone doe which casually glanced behind her. That tiny peek was all Muldoon needed. By the time he stood up, Luke saw the buck behind the doe. The buck hesitated, sensing danger, but it was too late. Muldoon was already on the buck and the arrow was on its way.