Jason Ashe (pictured here) and his wife Laura kill some of the nicest bucks in their central NY area each... 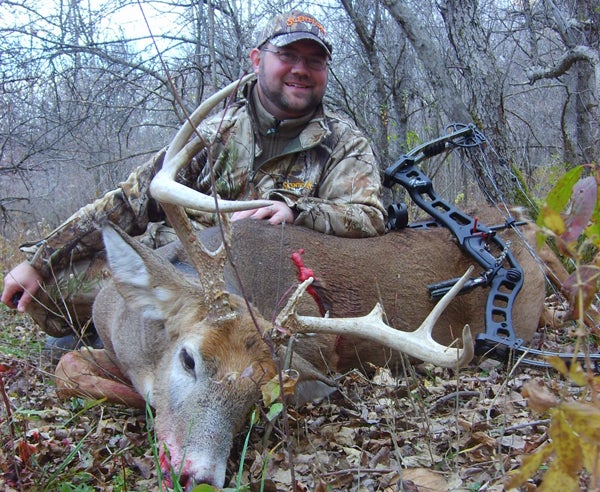 Jason Ashe (pictured here) and his wife Laura kill some of the nicest bucks in their central NY area each year. Their secret? They know their property and they know how the deer they hunt use it. They pay attention to what’s going on in the woods 24/7/365.

The Ashe’s are also big believers in doing their scouting and stand work early–as in right now. For them, this is the time of year for serious scouting for next fall and their tactic seems logical. Pre-season fall scouting alerts mature deer to your presence. To them it is all the same, and it stinks like human intrusion.

Late winter woodlands, on the other hand, are very transparent. You can see where the deer have been, what they have fed on, and how they beat you last season. There are no falling leaves to obscure tracks and trails and deer sign is very easy to read. Hunting season may have ended two month ago, but the sign is right there under your nose just asking to be read.

Like many serious whitetail hunters, Jason and Laura like to “walk ’em back.” That is, they go to where a good deer was seen or photographed and follow his tracks or trail backwards to learn where he came from and how he used the terrain. They may not find his exact tracks but can come up with a pretty good idea of how and where he moved. Walking ’em back can tell them where he bedded, how far he traveled, where he looked for does, and left his calling cards. It may even provide clues as to how he avoided hunters.

They look at obvious big buck signposts like serious rubs made by seriously large bucks (you can tell by the size of the tree, height of the rub and tine impact) and even scrapes (large, deep and aggressive) that might have been made by the kind of bucks they hunt. They also look for evidence of heavy feeding in thick cover–sure sign of where deer were spending most of their daylight feeding time. Browse sign is very obvious this time of year, too. Nipped branches will have light-colored tips where the deer have fed.

The best part of it all, is it’s a great time to be in the woods. After a hard winter, it’s plain invigorating to be out in the fresh air. But don’t get so invigorated that you stop paying attention. The time you spend in your deer woods in the next few weeks can be vital to putting an upper-end buck on your wall.