Of late we have been seeing single does crossing roads, standing in fields and feeding at strange times of day.... 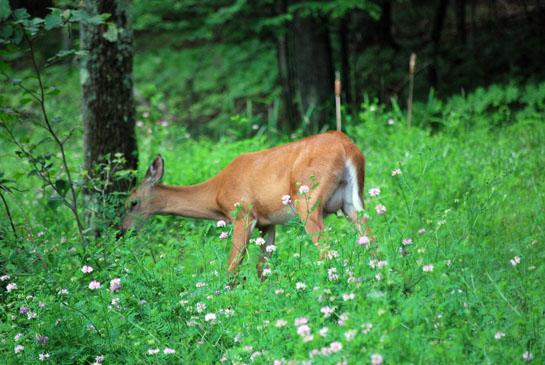 Of late we have been seeing single does crossing roads, standing in fields and feeding at strange times of day. We’ve also been seeing yearlings wandering around looking lost and sadly, a number of them dead on the side of the highway. This would all seem very strange if it weren’t for the fact that this scene plays out every year this time of year. Mature does have taken control of the woods and are hard at work raising their fawns.

Single does are the norm this time of year. They’ve driven off last year’s fawns (yearlings) and are totally focused on this year’s young. I can’t drive down a country road without seeing a lone doe hopping across the road. Nobody’s chasing them, they are just moving about trying to keep track of their fawns. Chances are they have two, one stashed under a brush pile, and maybe the second in a weed field 100 yards away. They are separated to cut down the probability of a predator getting them both at the same time. Ain’t Nature grand!

I came across my first fawn last weekend while mowing food plots. He (or she) was bedded next to an outbuilding and squirted out of the bed when I slammed my truck door. I heard it leave before spotting it 5 minutes later when I rounded the corner with the tractor. The fawn took off at full gallop, which told me it was a few weeks old. Its mother came to the field a half hour later, fed frantically 50 yards away from the Kubota as it mowed the tops off the first broadleaves of the season. She showed little concern for me or my tractor. She was on a mission and that didn’t include filling her rumen with fresh clover.

Does that are raising fawns are extremely territorial this time of year and are quick to claim the best habitat for fawning. They will also aggressively defend it against any and all interlopers–especially rival does with fawns. They run off the bucks (which are bachelored up in groups) and last year’s fawns are no longer welcome. Last year’s doe fawns will generally hang around waiting for mom to welcome her back in the family (she probably will in a month) but last year’s buck fawns (now growing their first antlers) will generally leave the area and attempt to start a new life without momma. The highway will take its toll as these yearlings move about and disperse without momma steering them clear of danger.

If you’re out and about in the country keep a sharp eye out for lone does doing their thing and dispersing yearlings. Every time you see a lone doe hopping across a road or standing in a field, tip your hat and give her a nod of appreciation. She is hard at work raising that trophy bucks you’ll be after a couple of years out. And be careful rounding that corner; the yearling standing in the middle of the road is a rookie taking his first road trip.