It took me a couple of years of doing it the hard way, but once I started treating my food... 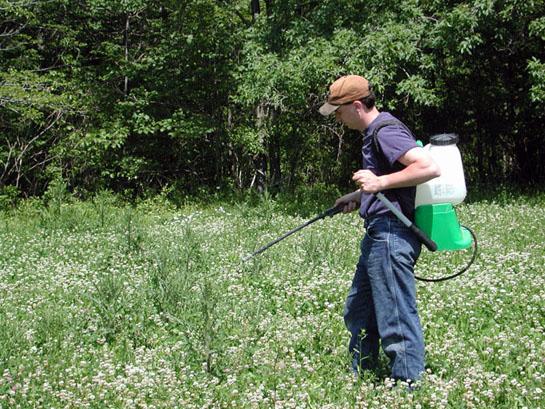 It took me a couple of years of doing it the hard way, but once I started treating my food plots with chemical herbicides I couldn’t live without them. They keep your plots growing strong and can double (or even triple) the life of a perennial food plot like clover or a clover chicory mix. They are best applied when things green up and are growing strong which in most parts of deer country is now.

Basically, 90 percent of food plotters can get by with two herbicide products: Roundup (Monsanto) and Poast (SASF). Roundup is a non-specific herbicide that will kill any plant it comes in contact with while Poast is a grass-specific herbicide which kills only grasses (most grasses). They are both spray-on products and can be applied with anything from a hand held sprayer to a 500-gallon, tractor-mounted sprayer.

Food plotters use Roundup when they want to kill everything growing in a given area. It could be a two-acre weed patch or a perennial food plot that is growing more weed species than clover. Food plotters wage an eternal war against weeds and invasive grasses that seem to always prevail. You have no choice then but go back to square one and start clean.

Its active ingredient glyphosate will typically turn green-growing plants brown in a week to 10 days. The dead matter gradually decomposes leaving plenty of room for a seedbed to be prepared and a new seeding to be started. Theoretically, the new seeds will take over the space and a nice weed-free foodplot will be off and running.

Poast is a grass-specific herbicide. Poast is engineered to kill only grasses. Invasive grasses are a constant issue for food plotters. Mother Nature has designed them to invade a space occupied by less rigorous plants like the stuff we plant in food plots and little by little invasive grasses will turn an acre of clover into a patch grass and weeds.

A once (perhaps twice) per year spraying of Poast will keep most grasses at bay. The active ingredient in Poast is sethoxydim, which gradually weakens any grass species it contacts. Unlike Roundup which creates a large scale dye off, Poast is more subtle. As grasses gradually weaken and die they are replaced by more desirable plants. You’ll notice the change in a few weeks and in a month you’ll wonder what happened to all the grass that was threatening to take over your plot.

There’ve been volumes written on herbicides but as far as food plots go, you can get most anything done with these two (and some selective mowing). They will save you tons of money and the deer will thank you for it. Both are brand names that cost plenty. Using less costly products with the same active ingredients (thus the above mentions) is perfectly acceptable and a great way to save money. Do some homework on the internet and take it from there.